If you read my last blog, you’ll remember that I am leading a life that’s parallel to my regular life. My second life is in my hometown of Murdo, SD.

I bought my childhood home and restored it to the way it was when my brother and I were kids. He was nice enough to give me the money I needed. The phone keeps ringing and it might be him, but I haven’t had a chance to answer it yet. I have no idea what my other self is doing. That’s the thing about having a parallel life. You don’t know about the other life, so you never have to wonder about it because the other you is living it just like nothing ever happened.

Anyway, I was cleaning up the furnace room downstairs and I found a little box. I remembered it from my childhood. It used to sit in front of the bookcase close to the fireplace. I opened it and guess what? 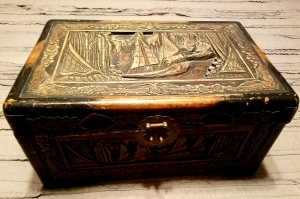 It was full of pictures of the things I described in my last blog. I swear, If I have ever seen these pictures before, my mind has blocked them out. I promise…I just found these. 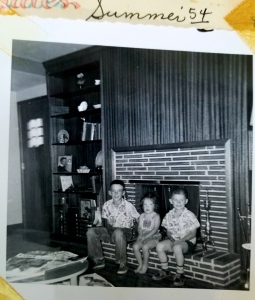 This is Billy, me, and our cousin from California, John Pat Francis. Remember how I described the nice wood bookcase and fireplace in the living room? If I had seen this picture, it sure would have been easier to restore all of that. I remember the cute picture of Billy on the bookshelf. I wonder if Billy has it… 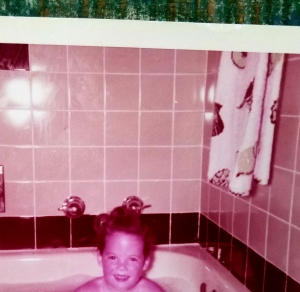 The bathroom tile is pink and black. I remembered the pink and black towels Mom had, but I didn’t remember the faucet was on the side of the tub. Dad was a plumber so I guess he knew what he was doing. The shower is on the other side of the towel wall. 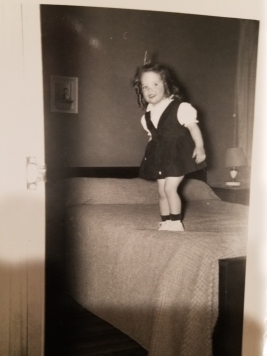 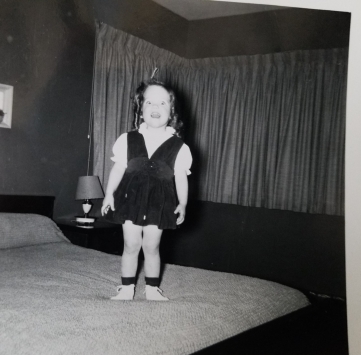 I remember this like it was yesterday or the day before. I was in Mom’s room standing on the bed. I told her I was just standing there for a while. I had no intention of jumping. I would have taken my shoes off, but I wouldn’t have been able to tie them when I put them back on. I don’t know why we all had to wear those white leather high-tops, anyway. 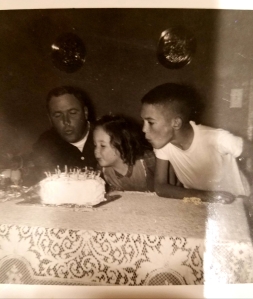 Another one with Billy in it. Mom had those gold plates too high up on the dining room wall…and too far apart. Mom was the queen of minimalist living. It’s funny…I don’t remember Dad wearing a colored shirt. He always wore white shirts. 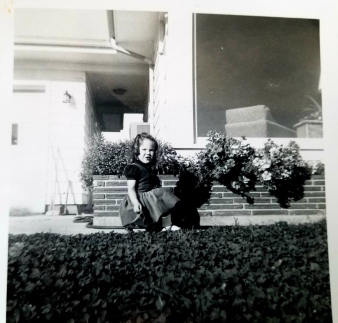 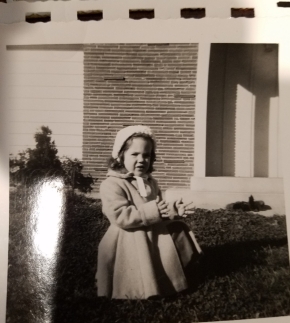 These front yard pictures show the planter I talked about and the breeze-way between the house and the garage.

Now…here is where the mystery begins. In this next picture, I’m wearing the Easter outfit Kitty Reynolds made for me. I’m standing at the front door. I must be about seven or eight because I don’t have my front teeth. 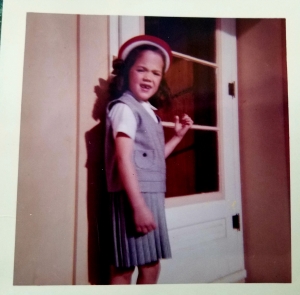 There are no pictures of me after this one. Oh, there are some school pictures, but that’s it! There might be some of Billy. I’ll look, later.

Do you suppose someone removed all of the pictures of me after the age of eight? Or…did my parents not take any. I do remember going through sort of a gangly, big-tooth stage.

Regardless, I think I should check it out and make sure there isn’t something more sinister going on. I still know quite a few people around here. I’ll start a full-fledged investigation tomorrow.

I wonder where people buy their groceries now? I suddenly have a craving for a chicken pot pie. And I wonder where I can get a coke and a Bing.

5 thoughts on “Murdo Girl…Mystery in Murdo”