I had an interesting conversation with our miss Murdo Girl this morning. As I talked, she looked at me so intently, I thought I was really reaching her. She kept nodding in agreement to everything I was saying. She doesn’t normally give me her full attention. When I finished she said, “I wonder if my Alden’s dress is back from the dry cleaners.”

I guess the lady is worried. She wants to know what I’ll be writing about in my papers now that I’m in high school. I told her I’m not here to cause trouble, but just think about it. To write about what it’s like to grow up in Murdo without leaking a little gossip, is like saying go read your favorite encyclopedia and write a paper that everyone will want to read.

I know Mom gossips some, but she does not like to listen to complainers. She was on the phone yesterday and I heard her say, “Don’t tell me about your troubles, I’ve got problems of my own, and here he comes now.” Then Dad walked in.

I’ve heard people say, “Don’t say anything about someone that you wouldn’t say to their face.” I’m not sure I agree with that. I’ll give you an example. The other day, Danny Koester said to me, “I’ve always thought you were kind of pretty Mary, but my Mom doesn’t think so.”

Now what was I supposed to say to that? He went on to explain.”She says you have a funny looking mouth.”

I’ve never worried about the shape of my mouth, but now it bugs me too. I’ve always hated my legs below my knees, because they look like chicken legs, but I never once thought about how funny looking my mouth is.

I think sometimes it’s okay to hide certain things from people, if you don’t get too convoluted about it..like what happened when Kitty Reynolds still lived here. She made an appointment with a doctor in Rapid City, and Mom agreed to drive her. A problem occurred when Florence, Dr Murphy’s wife, got wind of it and invited herself along. Now they were going to have to figure out a way to get Kitty to the doctor’s appointment without Florence knowing. They would have to ditch Florence, and that would not be easy. You see, Mom and Kitty knew Florence would be mad, and it would hurt Doc Murphy’s feelings if they found out Kitty went all the way to Rapid City to see another doctor.

The three of them headed for Rapid, and it wasn’t long before the first dilemma arose. Every time the ladies go on shopping trips to Rapid City, they stop along the way for pie and coffee. Florence kept asking when they were going to stop. Well, Kitty was going to have one of those tests where you can’t eat anything after midnight. She couldn’t even have coffee, because she doesn’t like it without cream and sugar. Mom knew Florence would suspect something if Kitty didn’t have pie and coffee, so there was no way she was going to stop. She said something about being in a big hurry. I’m sure Florence was puzzled by that.

Mom said Florence fussed all the way to Rapid because she wanted pie so bad. Thankfully when they got there, they had a little time to figure out what to do with Florence while Mom took Kitty to the doctor. Well, Florence really wanted to go to a certain store in the Baken Shopping Strip. Mom said she would drop her off, but she had to go see her friend Jeri Olson, who was in the hospital. Florence doesn’t know Jeri, so that was a smart move on Mom’s part. She told Florence that Kitty had to go with her to see Jeri. Kitty has a bad leg, so it made sense for her to stay with Mom instead of walking all over the shopping strip. Florence didn’t question any of that, but she was getting extremely hungry, so she suggested they all have a bite to eat first.

Kitty said, “No, we can’t do that because Loretta and I are on an all liquid diet.” By this time, they were at the shopping strip. Then Florence tried to pin Mom down as to what time they would pick her up. Mom told her if she was finished with her shopping before they got back, to go to Woolworths in the shopping strip and have a piece of pie.

When Mom got home that night, she said it was the most exhausting day she had ever lived through. Florence remained upset, and Kitty was as nervous as a cat the whole time. They couldn’t even eat on the way back since Kitty said they were on a strict liquid diet. Mom feared Kitty, who can’t think on her feet, would say something to blow their cover.

Upon hearing all of this, I reminded Mom of what she always tells me. “What a tangled web we weave, when we practice to deceive.” She said, “Yes, and if you ever mention a word about it, I will hit you so hard you will starve to death bouncing.” Which is another thing she always says.

One more thing about gossip. (I was pretty little when this happened.) One night a friend of Mom’s and her husband came over. The husband and Dad talked in the living room, and Mom and the wife talked in the kitchen. Well, a few days before then, I had heard Mom say something unflattering about the wife. I whispered in Mom’s ear that I was going to tell the wife what she said about her. Mom said, “Just a minute.” Then she dragged me to my bedroom. She told me to kneel down by my bed and ask God for forgiveness for even thinking about intentionally hurting someone’s feelings. Now, every time I think about gossiping, I remember what Mom had me do. 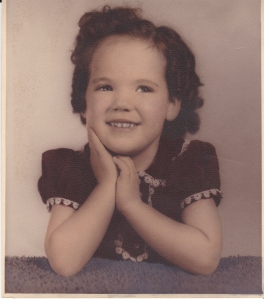