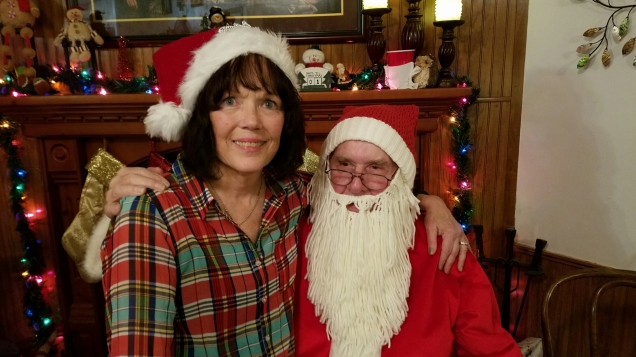 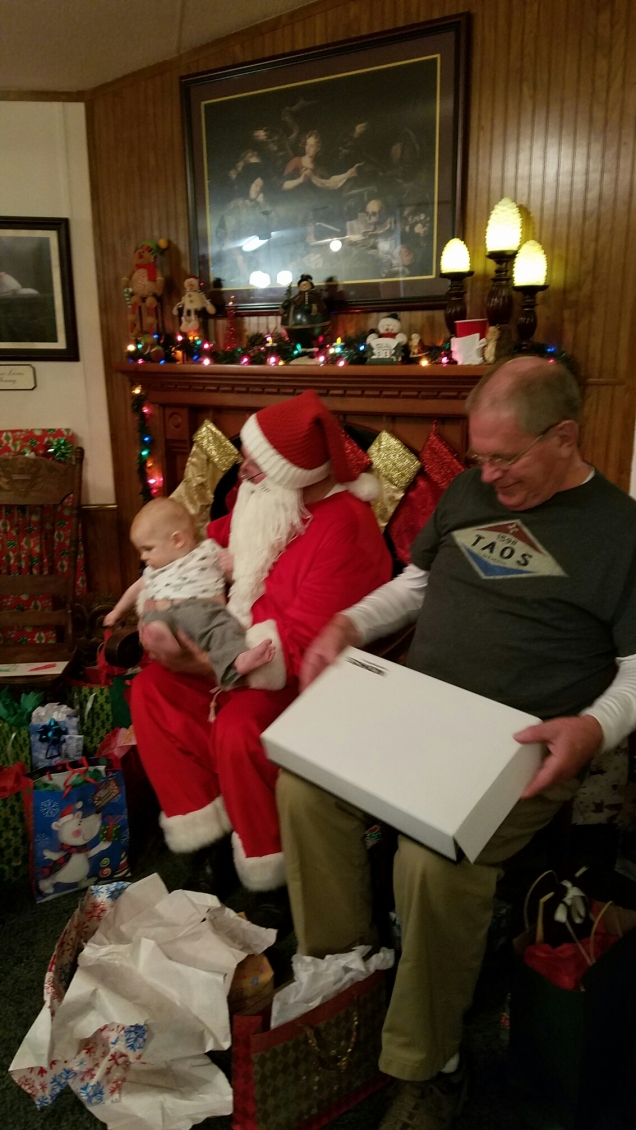 Below is Nikki with Ryan Constance. Skyler is also Nikki and her husband Justin’s little girl. 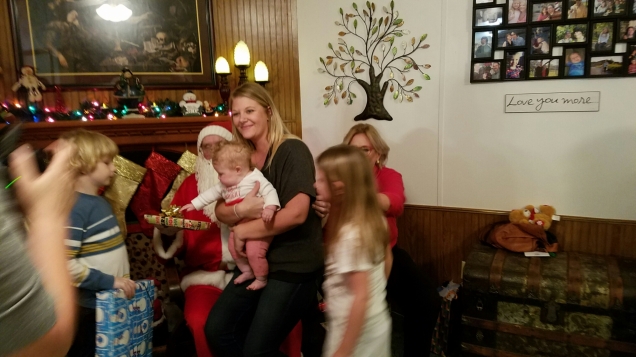 This is Skyler and she loves owls. She opened this gift from us and immediately put it on. Skyler shares my birthday. On December 31, she will be 7 yrs old.

She loved Santa’s visit Christmas Eve. Actually, Santa was really Santa’s helper played by Grandpa Gus, but we let the kids draw their own conclusions.

The grandchildren brought each gift from under the tree to Santa who called the name of the person the present was for. Each time the gift was to Gus, he said, “Put this with Gus’s pile.” Of course they were a little disappointed when the package was not for them.

Hudson who is 3, hung in there until the very end when the last gift was handed out.

When his job was completed, Santa went to change. He decided if one of the kids asked where he,(Gus) had been he would tell them he was keeping an eye on the reindeer. 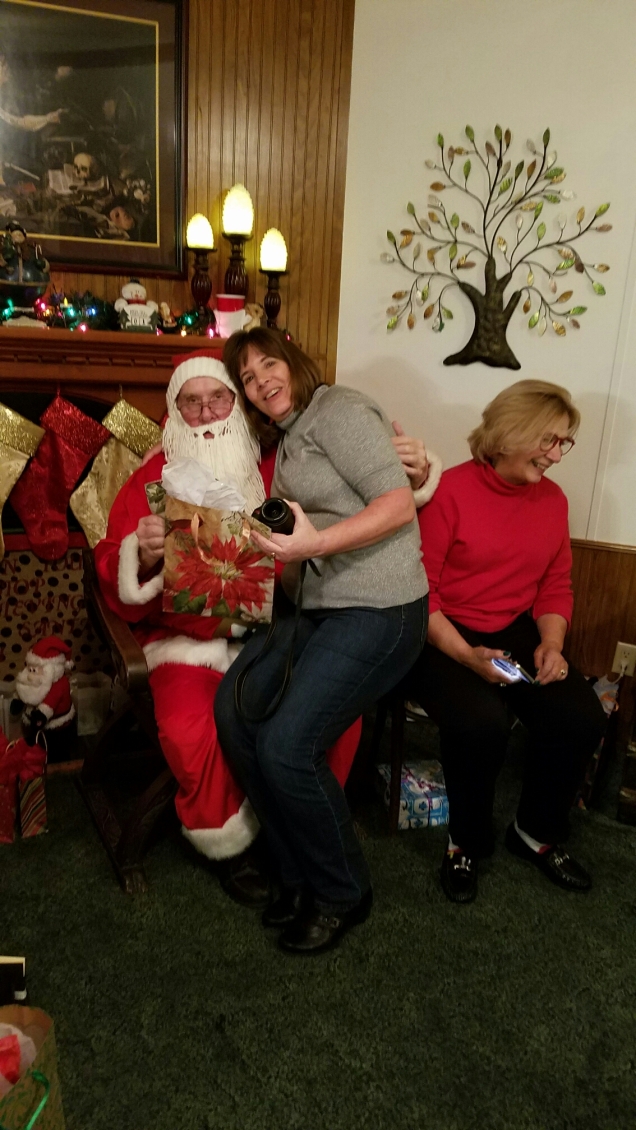 This is daughter Heidi and her mom Dianne from Long Beach, CA. I’m the Texas mom.

After he changed into his regular clothes, Gus walked through the kitchen where he met up with Skyler who said, “Are you Gus?”

“Uh, yes,” Gus said. He thought for sure he was about to be questioned about Santa’s identity.

“I think Santa left some presents for you,”she said. Then she went on her way. 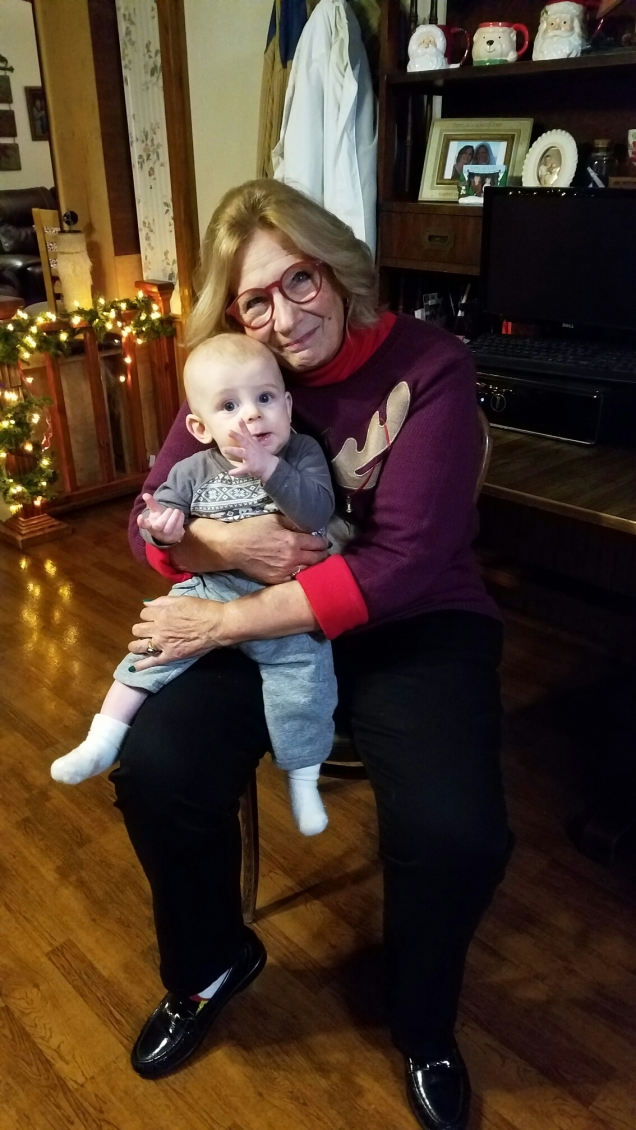 Our son Craig and his family couldn’t make it Christmas Eve, but we met him and his girls for breakfast on the way to take Gus to the airport. Our other son Mason and his family live in Wyoming, and we didn’t get to see them this Christmas.

Mason’s wife Amy lost her Dad just a few days ago, so it was a tough Christmas for them.

Below are pics of Grandpa Gus with Craig and his girls.. 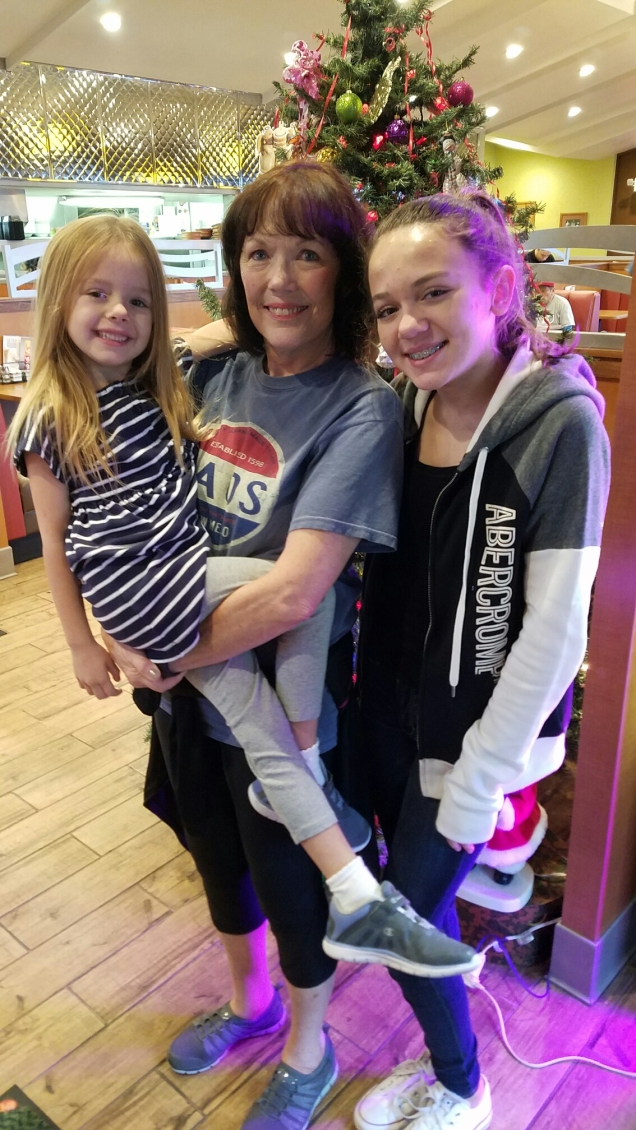 So..On to the New Year! Tomorrow I will practice rapping. I must ready myself to turn 65..or 56. I haven’t decided yet.

Guess you’ll have to  “Watch me now!”

5 thoughts on “Murdo Girl..Santa and the kiddos”