I found out they tore down the old Jones County State Bank, today. Do you know what that means? Murdo has temporarily lost another iconic building. Before we know it, the fifties and sixties will be nothing but history. I have personally been waging a war against changing Murdo.

The Brick House gang has already reprised the old Murdo High School and the elementary school buildings. Fern’s Cafe and Mack’s Cafe have both reopened. Joy Payne’s dress shop, the Murdo Show house, and Gambles are purring along. Beckwith’s Jewelry Store is next to Joy Payne’s. Mr. Beckwith is good at fixing watches and his kids are good at music.

The Post Office is back where it should be, and Thune Hardware is next to the drug store. The dry cleaners, on the other side of Mowell’s Drug Store, is still a much needed business in Murdo. There’s a locker for people to take their meat if they don’t have a freezer at home, and the Buffalo Bar is across the street from the locker. The Gem Hotel, the Murdo Hotel and the Laundromat are all uptown, too.

Super Value still has the Frosty Freeze attached to it, and we have five or six full service gas stations. In addition to Mack’s and Fern’s, you can eat at Highway 16 Cafe and the Teepee. It’s pretty new.

Most importantly, Sanderson’s Store is just as it always was…Aunt Tet lives upstairs and the Leckeys are living in the apartment across the hall. Doc Bork is our dentist and Doc Murphy makes house calls. Uncle Jerry builds all the new houses and Dad has a plumbing and heating business. 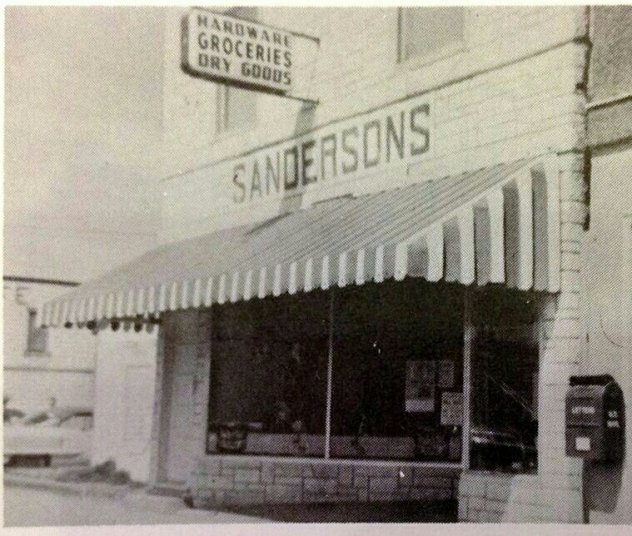 Graham Motor Lodge is under construction and they’re going to have a swimming pool. Mom runs our little motel called the Chalet which is across the highway from Grahams. The Gonzales, Boysens, Wheelers, Iversons (The Red Top), and Laura Hayden all have motels, too. (I might have spelled some of those names wrong.)

There are a couple of beauty shops in Murdo and Kitty Reynolds sews for more than a few families. People buy their cars from the Ford Garage and the Pioneer Auto Museum is almost as well known as Wall Drug.

The ladies in town play a lot of bridge, and drink a lot of coffee. They probably gossip more than they should. Nobody likes to miss coffee because they can only talk about the ones who aren’t there. After coffee, Mom and Aunt Elna go home and call each other to gossip about the gossip. It’s a lot to keep up with.

The boys have football, basketball and track and the girls have basketball. There are no home economics classes offered, but the moms who can cook, teach their girls. Makes sense to me. I already know how to make chocolate chip cookies. What else do I need to know?

I love the new Swanson’s fried chicken TV dinners and Mom makes baked potatoes with chicken pot pies. We mush them all together on our plate. It’s very filling and good! She makes roasts and all kinds of other good stuff.

When kids go steady, the girls sit in the middle of the front seat of the boys car, even if the car has bucket seats. They drive around town for hours. I don’t know how they can do that. Gas is 35 cents a gallon. The girls also wear the boy’s class rings and make them fit by sticking wadded up tape under the wide part.

There are lots of little stock dams where guys like Grandpa Sanderson like to fish. You can boat but you can’t swim at the North dam. We swim at the East dam, and fish at the South dam. One time when Billy was going to be late for school, Mom didn’t make him go. We all hate to be late for anything. Anyway, he went fishing at the South dam and someone caught him and called him a truant. 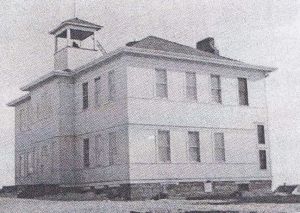 Yup…I’m taking it upon myself to keep Murdo just like it was, so whoever wants to help me is more than welcome. Those guys who tore down the bank can just put it back together again.

Guess I’ll put an ad in the Murdo Coyote.

7 thoughts on “Murdo Girl…Putting Murdo back together”