Well now that The Donald has officially accepted the nomination of the Republican party, and Hillary’s convention is next week, it will soon be time for Barney and Murdo Girl to quit loafing around and get Murdo, the center of it all, fired up again. We can probably have a convention in The Harold Thune Auditorium now that all the alumni have cleared out. I don’t blame the Coach for putting plastic on his floor. Do you think that’s why it was hotter than fire in there? My hair looks dripping wet in every picture. With my most recent bad haircut, it didn’t look that good dry.

I had to go to the doctor a couple of days before I left for Murdo. It was just a regular check-up. I had gained a few elbeez since the last time. When I commented that I had gained weight only because I was going to a reunion, the good Doc said, “You look great and everyone you see will think so too!” Then as I was walking out, he said, “Of course, there’s always someone who looks better.” What is that supposed to mean? I will say most of the alumni I saw, were pretty well preserved.

For the Parade, Valerie was dressed like the Queen who’s 90, and I was supposed to look like an eight year old playing dress-up . I’m sure there was more than one eight year old that looked better than I did.

Kip thinks it’s kind of weird that I’ve been wearing my red gown and tinfoil crown every day. I don’t see why he should care as long as I continue to do all my chores. Well, not all of them I guess. Part of the reason I still wear the gown is because I haven’t done the laundry in three weeks. When I wear the dress, I have to wear the crown or people will look at me funny.

Yesterday,  I hung around the Monitor until it got too hot. The Monitor is our local newspaper. (I don’t have a “Newspaper Liaison” here  like Teresa in Murdo.) I believe in being proactive when I need to get noticed for publicity. You know, for my campaign. They finally snapped a couple of pictures. The picture was okay. It was even on the front page, but the caption said, “Aging queen posing as an 8 yr. old. Approach with caution.” It’s not true what they say. There is such a thing as bad publicity.

“Hey Queenie! What would you say to your older selfie?”

I came home and Kip had started the wash. He is doing great after some serious back surgery. It was hard work nursing him back to health. When I left him to go to Murdo, I had to remember to call every day. Our friends, Pat and Jerry who drove him places and did other things, said he was great and never complained. Our kids always behaved better for someone else too.

Unfortunately, I just found out from Lav that Texas is not one of the states we filed in so campaigning here will do me no good. I’m going to ask Kip if we can take the RV to Murdo for the convention. “Aggressive Informant, have you found out anything more about that low flying plane?” 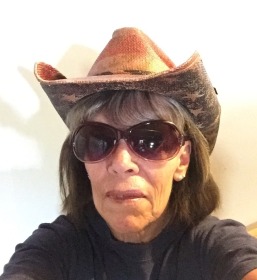 I don’t think she heard me. Poor thing, she tries so hard. I hate to tell her, but that plane isn’t flying. I like the new hat though. It completely changes her look. My Photographic Drawer does good work.

I have to remember to ask Jerry  Elrod, my bean counter, if we have enough $ to buy more tinfoil.

What I’m trying to say here is there will be some campaigning, complaining, and explaining; Murdo talk, storytelling, relishing, and embellishing in the days to come. After all..I don’t want my crown to lose it’s luster. 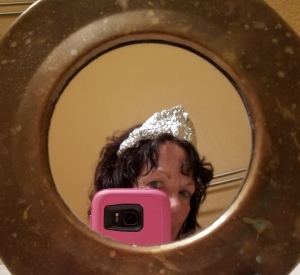