I really did not expect the response I got from last night’s post. You are all incredibly kind, but the thing that has me most excited, is all of the suggestions I received for a variety of blog topics. Karen Lindquist and others came up with some great Murdoite memory ideas. I have to admit, I have been helped by many of you in the past. The campaign was suggested by my cousin Bob Haverberg. Valerie has had several gems and she’s such a good sport. Eddie and Mari Jackson have provided ideas and most of the photos of our high school years. Sheila came up with the idea for A I, whom everyone loves, and Laura offered to be the Town Crier, and wear her cheese head. Jerry the Bean Counter, Sherri the Photographic Drawer, and Carol the singer may have been products of my imagination run wild at first, but you have all taken ownership and made each character your own. Teresa, who is Treason the Coyote Liaison, also helped spawn the idea of having the Queen be a regular.

I see clearly now the direction Murdo Girl should take. It will be about a variety of things, from Murdo stories, to Mrs. E. stories, to the evolution of Murdo Matters., and beyond.

That being said…It’s all about Mrs. E. today.

Since I mentioned Mrs. E. in my last post, I’ve been thinking about her more than usual, which is really quite often.

Because of a suggestion from someone I have a lot of respect for, I am going to write this story about Mrs. E. It is not what I would have done just yet. I would have told the stories from the beginning, but I decided I wanted to accept the challenge. You will find out what the challenge was at the end of the story.

I came home after the first day with with Mrs. E. and told Kip I wasn’t going to tell anyone about this job right away. I was seriously doubting that Mrs. E. and I would make it together. I felt that way for a while, as I’m sure she did, but the days turned into weeks, and the weeks into years.

I had been with her five mornings a week for a few months and we were making pretty good progress. The biggest problem I was having was getting Mrs. E. to take a bath. She was partially paralyzed on her left side, and it was a pretty big ordeal for her. Fortunately, her daughter was able to train me how to help Mrs. E. maneuver from the wheelchair to the bathroom stool, and onto her shower chair. I could then help her with her bath. We had another system to get her back into the wheelchair. I would push her to the bedroom where she had a pole with a crossbar near the bed. She could pull herself up and swivel around on her good leg and get onto her bed. I would help her get dressed and back into the wheelchair.

One morning, when I arrived, she informed me that she wanted me to dye her hair red. Her daughter kept it clipped in a cute short style, so I knew it wouldn’t be a big problem to color it. We told her daughter about our plan and she agreed to purchase some hair color for us.

The next morning, Mrs. E. met me at the door. Her hair color kit in hand. I said,” Great! Lets go get this on your head!” We got all the dye on and while we waited, I asked her if she wanted me to do her nails. I immediately regretted asking, because I knew better. Mrs. E. usually only agreed to do things if it was her idea. If I suggested something, she always said no. As expected, she said no, and I just shrugged my shoulders like it was no big deal. I also knew she wanted me to coax her. When I didn’t, it ruined all her fun.

When the buzzer went off, indicating it was time to rinse the dye, I started to wheel her to the bathroom. She hadn’t thought about rinsing. She didn’t get to decide about the shower this morning. She didn’t get to use her wily ways like asking me if it was cheaper to take a shower or a spit bath. It was amazing how much she wanted to save on the water bill on cold days. This time, the jig was up and she reluctantly let me get her into the shower. We got her hair rinsed out and finished getting her dressed and ready for the day. She was smiling from ear to ear.

We had taken a before picture, so now it was time for the after photo. She didn’t look at me when she said, “You know, if you reeeaally want to polish my nails, I guess it would be alright.” 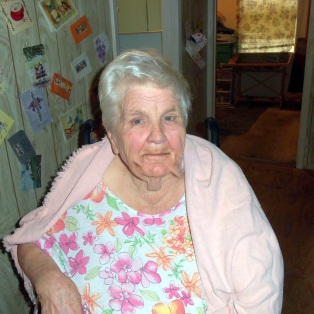 Judy Dykstra Brown, as I’m sure most of you know, has a blog called Lifelessons. She is amazingly talented, and if you haven’t checked it out you should. She is extremely creative and talented in both her writing and photography. Each day, she takes the word of the day challenge and works her magic from the prompt she gets.

Judy read my blog yesterday, and gave me a prompt. The prompt was fingernails. How do you think I did?

Tomorrow, we’ll get an update on the goings on at The Brick House. I’m starting to miss the Murdo Coyotes.

20 thoughts on “Murdo Girl…Before and after”