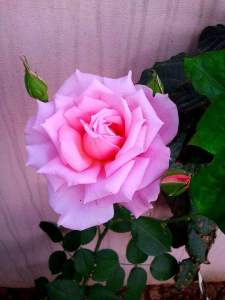 I’ll never forget the day I met her. I had no idea what I was getting into and neither did she. We didn’t talk much that first day or the next. I think she was surprised each time I showed up. I was a little surprised myself. I was not what she was used to, and she was not what I had expected. With all this going for us, we forged ahead. We thought it would never last, but it did. She was one of the most interesting and entertaining people I had ever met.

We grew to understand each other, and with understanding came respect. She was 84 and had lived her life, but it wasn’t over yet. I was 59, which is an awkward age. All the major decisions had been made and I had enjoyed the rewards of some decisions and endured the consequences of others. Life is long and life is short.

We spent our mornings together going through our routine. I fixed her breakfast, which was usually spicy sausage patties, eggs and toast with marmalade. Sometimes I could get her to take a bath before she ate, sometimes after, and sometimes not at all. She loved to give me a hard time and had some pretty compelling arguments like, “Is it cheaper to take a bath or just wash up? I have to watch my water bill you know.” We made deals like, “If you don’t take a bath today, you have to let me wash your hair tomorrow…deal?” She would have to think about that one, because she never broke a promise. If she made a deal, she followed through.

She spent much of her time fussing over her old dog Rascal and a stray cat she grew attached to. On nice mornings, she would wheel herself out onto the front porch and I would get the folding chair and sit beside her. We watched the hummingbirds drink the nectar from the feeder that hung from the big tree out front. Sometimes she fell asleep in her wheelchair, but other times she told me about her life.

She married young and had 4 children each 2 years apart. Her husband died of cancer when the youngest child was only a few weeks old. She told me she was surprised when she had the first child because her Mother told her the doctor brought the babies. I can only imagine how tough the next years were for her. She outlived 3 husbands and survived hard times, but there were good times too.

She loved to listen to country music on the radio. Her folks had barn dances when she was growing up and her Daddy played the guitar. The music took her back to those days. I love the same kind of music. We would close our eyes and listen as we thought about the memories the songs evoked.

We spent time cleaning and doing laundry. She needed help with things I took for granted. Some things fail us as our bodies age, and it’s hard to accept the help we need. I understood, or at least tried to. I could only say, “That’s what I’m here for.”

She loved my chocolate chip cookies. Her favorite cake was strawberry. Her favorite lunch was a Spam sandwich with cheese and mayo. She loved the hot Spam with jalapenos. She taught me how to mix up cornbread without a recipe. You can tell when you have enough milk, eggs, and cornmeal by the batter. You must never stir it too much. We made fried cornmeal mush like my Grandpa Sanderson made, and ate it with butter and syrup.

She had false teeth and glasses, but never wore either. She could hear a pin drop..if she wanted to. She could be feisty and cantankerous, but she was always contrite afterwards. She had a soft heart, but she could get angry. Then.. as she would say, “Look out!”

Her youngest daughter and her family lived across the street. Her daughter was her Momma’s Angel. She took the responsibility of meeting all her Momma’s  needs. She made doctor’s appointments, and took her to them; patiently helping her transfer from the wheelchair to the car. She prepared her suppers, which the family usually ate together. She bought her clothes and groceries, and most importantly… paid attention to her. As Mom’s and daughters do, they fussed at each other sometimes. “Don’t drag your left foot Mamma,” I’d hear her daughter say. “You’re going through too much cat food and it’s going to waste.” She was right. Cans of tuna fish were disappearing along with all the cat food. Rascal must have had an iron stomach with all the spicy spam he ate.

When Kip and I got back from our vacation two days ago, we had 31 messages on our answering machine. One was from Mrs. E’s daughter. “Momma passed away,” she said. “Call me.”

I went to see her a few times at the nursing home. It didn’t feel right. Maybe because those four years we spent mornings together ended more abruptly than they began. I don’t remember what we did that last day before she got so sick. She went to the hospital first, then to the nursing home. I went to see her right after she got there. She hadn’t been awake yet. She had been there for rehab several years before, after suffering from the stroke that left her partially paralyzed on her left side.

I was standing by her bed when two young aids came into the room. They asked me if I knew anything about her. They were told by nurses who had been there when she was in rehab, that she might swear at them and try to kick them. That made me smile. “She might,” I said. “I hope she does.”