We lost our Cyndie Lou yesterday. Our hearts are hurting, but we have many wonderful memories of the twelves years we were blessed to have her in our lives. She even helped write some of the blogs. 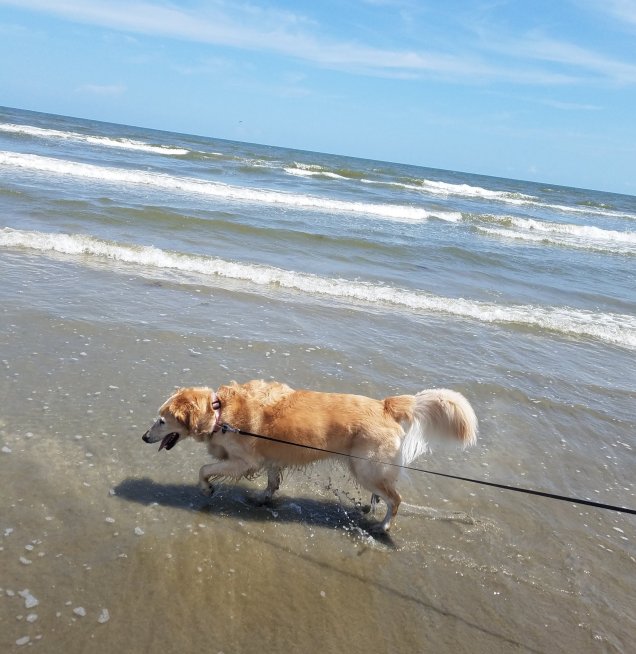 Hi MG readers! My name is Cyndie Lou, and I’m going to tell you about the first few days of our epic RV trip from a dog’s eye view. I don’t intend to take over the blog or anything. That would make MG’s eye start twitching, and that’s not a “good girl” thing.

These are my sisters Pattie and Sammie. They’re sleeping on our couch at home. Kip and MG made us get up at 4:00 o’clock Monday morning, so they were still tired.

They fall for that one every time…

Kip and I sitting in the RV waiting to pull out of our driveway. My sisters and the cat are in the RV too. MG is going to follow us down the street with the jeep so we can hook it up and tow it.

Here I am riding in the RV. It was a long day. It wore me out. I like to use Pattie’s head for a pillow.

We left our house around 7:00 a.m. and drove 479 miles to Palo Duro Canyon which is in the Texas panhandle. We drove through miles and miles of flatness where you can see farther than anywhere and still see nothing.

We pulled into Palo Duro State Park at 5:00 p.m. and it was pouring down rain. There were flash flood warnings which worried me.

This is me looking worried. I don’t know if I can swim.

Sammie gets worried too. Kip is hooking us up outside. MG is doing stuff to get the inside ready for us to live in.

Dollie can’t go outside when we’re camping so she sits in the window.

The Palo Duro Canyon musical, Texas, was incredible. It was also armed services night. The service men and women were honored with a flag presentation, which included the songs and flags representing each branch of the service. At the end of the musical, which tells the story of how Texas came to be, there was a patriotic finale complete with fireworks and a water show.

The talent was outstanding and so was the choreography.

Except for the rain the night we got there, we were blessed with perfect weather the remainder of our stay. 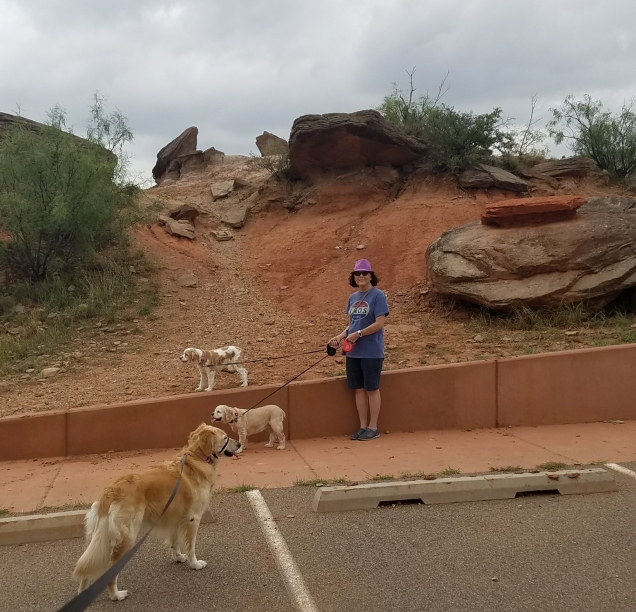 The Red River wars ended in much the same way as the Indian wars of the western plains. In the battle of Palo Duro, the cavalry killed most of the buffalo and eleven hundred of the tribe’s horses which forced the surrender of the Indians whose settlement was in the Palo Duro Canyon.

Palo Duro is Spanish for hard wood. I don’t think Kip and MG would have taken us to see a place called Hard Wood Canyon.

If you haven’t read about Cynthia Ann Parker, who was kidnapped by the Comanche when she was nine…you should.It’s a fascinating story. Her son, Quahna Parker, was a prominant leader and successful businessman.

Another tidbit of information.

Did you know General George Armstrong Custer graduated from West Point? He was at the very bottom of his class.

We are planning to stay tonight at a KOA campground between Pueblo and Colorado Springs. We should be there soon which is good, because I really need a walk and a bone.

MG was without internet and phone service while we were at the bottom of the canyon. She’s not used to being unplugged, but she survived and enjoyed herself immensely.

Tomorrow, we’ll be off to Laramie, WY.