I wasn’t going to write a blog tonight because I figured you were tired of hearing about our back-breaking efforts to clean up our small house mess. It will be several more days before we will be able to see the light at the end of the powdery dust that gets into everything, tunnel.

I only got three little breaks today. We braved the freezing cold to go to McDonald’s for breakfast, then on to shop for new bathroom towels and rugs. The second break was a quick trip to Dollar Gentril to buy some Fabuloso. Dollar Gentril is right next door to Goodwill, so I stuck my head in there to say hi to my friends, and check out the newer old merchandise.

The third break was when my brother, Billy, called. I kind of thought I would hear from him today. I was a little fuzzy on the details about Mom’s early room-renting days. Billy told me to get a pen and take notes.

First of all, there were two signs directing people to our house…one at the end of our street by Highway 16, and one in front of the house.

Billy said we all slept downstairs and the tourists stayed upstairs. I told him I specifically remembered the roll-away beds downstairs. He told me they were for us to sleep on.

I guess I didn’t tell the part about Dad waking him up to ask where Mom was right either. Billy said he was coming out of a  dream and he told Dad she was at the Murdo house. The one that had six or eight rooms in it.”

Dad was really confused about that and he continued to question Billy, which is why Billy started crying. Dad was trying to make sense out of what he was saying, and Billy was getting his information from the dream he just had. 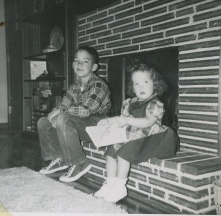 Billy and Mary… when we lived at the new house

Let me look at my notes here…

The very first night, a nice couple rented one of the upstairs rooms. The husband and Dad started talking and one thing led to another. A fun evening was had by all. Unfortunately, it was at our expense and since we only charged five dollars a night, we lost money.

Billy said we rented out our bedrooms because we needed money to buy drapes, which was apparently a real motivator. We also needed a sidewalk. We had wood planks leading from our house to the street. One night, two very well-heeled women rented a room and when one of the ladies went back to the car to get her suitcase, she decided to take a shortcut to the door and walked through a bunch of mud. (We hadn’t put the lawn in yet either.) She sunk her well-heeled foot up to her ankles in South Dakota gumbo. It was the kind of soil that if dry, would have very deep cracks in it. Billy said he stuck a hose in one of those cracks and left it running all day. It never did fill up.

One night Uncle Al and Mr. Brost came over to visit with Dad. They had to talk downstairs because we had tourists upstairs. After a while, one of them started playing songs on the jukebox. We had all kinds of forty-five records which they played loudly. Billy said he was in his room and he heard the McGuire Sisters singing the same song over and over again. The jukebox had so much power, you could hear it all the way to Draper. I forgot to write down the song, but it might have been “Just for Old Times Sake.” I remember their song, “Sugar in the Morning, Sugar in the Evening, Sugar at Suppertime.”

Mom had rented the upstairs rooms to two couples. They all left in the middle of the night. Billy said they didn’t even ask for their five dollars back.

Mom got some real nice drapes and eventually, Dad put in a sidewalk, but we never did have a lawn. Fortunately, the weeds grew thick and green, so we just mowed them down.

We had an old push mower and weeds like in the picture. Once, Mom was mowing at the motel and hit a rock. Her foot got caught in the mower and it cut half of two toes off. (She was wearing sandals.)

When we lived at the new house, Mom grew flowers in the planter under the picture window and she had a spearmint plant beside the front steps. You could always smell spearmint gum when you walked past that plant in the summertime.

I know what Loretta-ism Billy and I would hear if Mom was around. “If you’re going to tell a story make it good or don’t tell it!”  It’s the same one I heard her say the other night, but we tell a story a minute in our family. Mom also said, “I’ve told you a million times not to exaggerate.”

Talk to you tomorrow, Billy…THE END