You, (or it), are, (or is), driving me to distraction.!! I can still hear Mom say this…her hazel eyes flashing. Everything Mom did was fast. She power walked before it became popular. If I hoped to get a little more sleep on Saturday mornings, my hopes were always dashed. I could hear Mom walking from the kitchen to the laundry area of our basement house, which had a tile floor. Clomp, clomp, clomp… back and forth she went. She wasn’t doing it to disturb me. That’s how she walked. She would find one piece of laundry and walk to the washing machine to throw it in, wash a few dishes and then go into the living room to grab her coffee cup. She might take a couple of puffs of her Salem cigarette, but could rarely sit down long enough to smoke the whole thing.

Eventually, it would start to bug her that I hadn’t gotten up yet. She would stand in the doorway of my bedroom off the kitchen and flip the light on and off a few times before she said, “Rise and Shine!!”

This was my mother, who got many of her mothering tips from Ann Landers or a friend that had read Ann Landers. I wrote about the afternoon  I got home from school just in time to change, grab a bite to eat, and get to the auditorium for the basketball game? I walked into my room and everything in my closet was now on the floor, and everything in my dresser drawers was thrown onto the unmade bed. Mom was right behind me, arms folded. She informed me that so and so had read Ann Landers and she said if your teenager refused to keep his or her room clean, you should throw everything on the floor and tell them they can’t leave until everything was neatly put away.

I cried and she caved, but it was all waiting for me when I got home. The older I get, the more I’m like my mother, only a couple of octaves lower.

My brother, Billy, and I are seven and a half years apart in age. I was in the fourth grade when he left for California to go to work and attend college. Most of our dad’s family lived out there and he lived with them for a while. Our Uncle got Billy a job parking cars for the Dodgers. Little did he know that he would spend the next fifty some years of his life in the parking industry. He is finally going to retire the end of this month. He has been a little nervous about retirement. We’re all just going to hide and watch.

Billy and I didn’t spend long periods of time together after he left for college, and I think we both felt a little like only children. When we were together, he would say, “Do you know what my mother said or what my dad did?” I sometimes said, “Hey, it’s our mother and our father.”

Billy and I are really close now. I can’t wait to see Gus and him and of course, cousin Valerie and Ken in Arizona in a couple of weeks. We’ll all be there for the Jones County reunion.

I have no idea how I got off on the subject of my mother, though I shouldn’t be surprised. She has a firm place in my head all the time.

On to other things…

Kip and I left our house about seven-thirty this morning to check out the lots we had uncovered with the realtor, yesterday. The first one was too far away, but we decided to look at it anyway. We took the dogs with us, and apparently they hadn’t gone to the bathroom before we left and were getting kind of antsy. We pulled off the road and let them run around a bit. That’s how we got the jeep stuck.

I know it doesn’t look like we’re stuck, but the tires just kept spinning. We were trying to back up. The second photo is Kip walking downhill to the road to make sure there was no quicksand to get into. I ended up pushing a little and we made it. The lot wasn’t an option anyway, the subdivision doesn’t allow tiny homes.

They do, however, allow people to put a propane tank on their front porch. The little mother-in-law suite next door looks like it could be having some foundation issues.

My tiny home and I will not go where we’re not wanted. They would rather have a house like that in the neighborhood, than this: 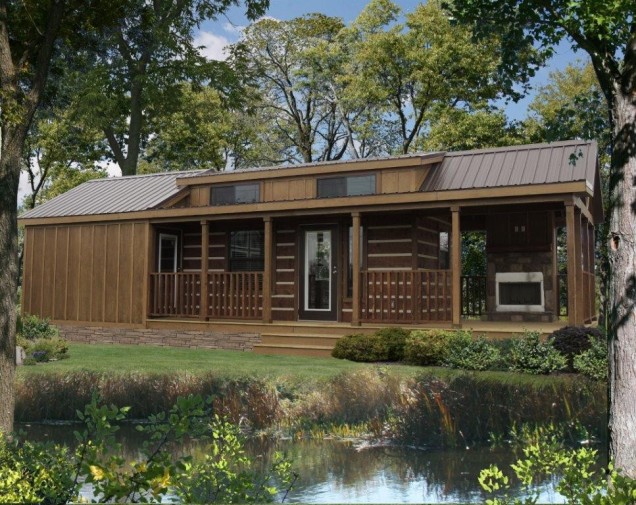 This is the Meadow View. You have seen it before in the blog, but I keep coming back to the wrap around deck, two doors to the outside and the outdoor fireplace. After you pick your floor plan, which we haven’t, there are still so many choices on the inside. Here are some pics of the same model, and the same floor plan, but the colors and staging make it look very different. 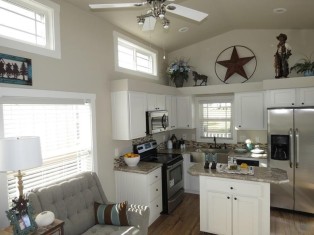 I like the stone walk- in shower, below. We can switch it out, but if it requires more space, it has to come from the kitchen or bedroom. 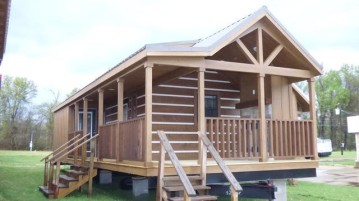 I took some other pictures of lots, but we don’t know the story on them, yet. Our realtor said he would get with us tomorrow after he does some research. In the meantime, I’m rather enjoying our “small home.”

See, I’m a lot like Mom. I jump around a lot and sometimes I have a difficult time finishing what I started…makes me smile, but it drives others to distraction.

One thought on “Murdo Girl…It is driving me to distraction”