Remember not too long ago when Kip and I were making plans to pilot a new show for HGTV. Sherri Miller suggested we call it “Tiny Tippers”, which was a good idea. Since we aren’t going to buy a new tiny home every week, the premise will be for us to give helpful tips on the ins and outs of getting a tiny home from conception to completion. The new word for tips, is actually hacks, but “Tiny Hackers,” reminds me too much of the cold I just recovered from.

Anyway, we will eventually complete our pilot, but we’re at a standstill right now, so we came up with something to keep us busy and still be able to use the ingenious name, “Tiny Tippers.” Here’s how we came up with the alternate usage.

We currently live in an RV Park right on Main Street in Gun Barrel City. We have to walk our dogs several times a day which gives us…shall we say, “opportunities” to notice what people are doing. Unless we know them, we really don’t care what they’re doing so we only spy on…not really spy…what is a good word that means something like spy, but not offensive? Anyway, we only detect and make note of what people we know are doing.

Today, for instance, we happened to be walking over by East Texas Medical Center. We saw a lady who looked like Helen P. hop out of her car and jump into a man’s car. Kip yelled, “Hey! What are you doing?”

Helen turned around and said, “We’re going to get a hot dog, and then we’re going to come back here and walk.”

While Kip had Helen distracted, I took the dogs and walked over to the other side of the car so I could identify the man Helen was apparently rendezvousing with in the parking lot… in broad daylight, no less.

Well, it was Gary P, Helen P’s husband, which is beside the point entirely. It could have been someone we didn’t know, in which case, we wouldn’t have paid any attention to him unless, of course, Helen wanted to introduce us.

Tip: No matter what you suspect, always drill down until you get to the truth.

Later, we saw Don R running into ETMC. He was carrying a suspicious looking bag. We were quite a distance away and the dogs were getting too tired to move fast. Hence, we weren’t able to get Don R’s attention, so we went on to complete our walk. When we came back through the ETMC parking lot, Kip said, “Hey look! There is Don R’s car and it’s parked all crooked. What do you suppose that means?” 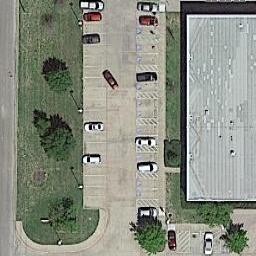 “Don’t you remember how fast he was running to get into the building with his little bag? The way he was hanging on to it, I’m sure it was probably full of money. Maybe Gary and Helen P are blackmailing him and he was rushing into the gym where they were going to walk after they had their hot dog.”

“No, I don’t think so,” Kip said. “There is Mary Ann R ‘s car parked next to her husband, Don R’s car. Man, they are taking up three parking spaces, and they’re good ones too!”

At that point, we had to go back to the RV because the dogs wanted water.

We are left with one unanswered question. Why the heck do all these husbands and wives take separate cars to the ETMC gym? Look at all the time they have caused the “Tiny Tippers” to waste!

Later, we left to meet our Tuesday night dinner group in Athens. We both rode over in Kip’s truck. On the way there, we agreed to keep the events of the day to ourselves. We don’t think it’s necessary to “tip” people off. We will only talk about any given incident if there is dirt involved, if you know what I mean.

Anyway, if we don’t get some dirt soon, we’re going have to go out there and meet some people who aren’t so stoic. There is no money in spying on stoic people.

We went to a Chinese food restaurant tonight. You will not believe what I found when I opened up my fortune cookie.

It really inspired me.

Below, is the little girl who once swam at the swimming dam east of Murdo, SD. Pink Sandy taught me how to swim. His grandson, Wayne Esmay, shared this picture with me today. 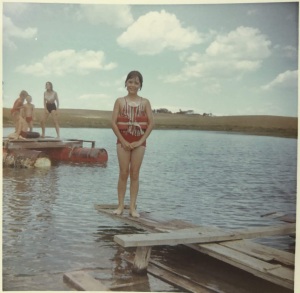 I’ve grownup so much. I was the only kid in this picture who was still wearing a life belt. I no longer wear one, and I don’t hold my nose when I go under anymore, either.

We can’t afford any cards yet, but if you require “Tiny Tippers’ ” services you can contact us at the ##### RV Park, space ### in Gun Barrel City. We’re in the RV with the busted up door. It’s been that way since the other night when we accidentally got locked out and the police had to come and show us how to break the door in. (Our dogs bite and the door is well barricaded.)

Tiny Tippers…If we don’t find dirt, no one gets hurt…We’re not bored, we’re just broke.

**Kip sat by Barbara S tonight and I sat next to Sara H. We got nothing. I probably could have gotten something on Bear J who sat across from us, but I passed on it because he’s going to help me back-up the dirt on my computer on Monday.**

Tomorrow is another day. I’m going to a painting place with some friends where we will eat and paint. I can’t paint, so I’ll try to overeavesdrop some dirt or at least a light dusting.