In our minimalizing process, I ran across tons of pictures of our pets. Our little Westie was one of my very favorites.

My name is Sadie. When I was just a pup, a really nice lady picked me out of a litter and took me home. I loved her from the start and she loved me. We lived in Loveland, Colorado.

This is a picture of my nice human lady and her human son.

Did her human daughters love me? Not so much…They called me the dog from hell. You see, my human’s husband got pretty sick and she didn’t have much time to teach me things like, don’t run and jump on everybody. I ruined some of the human daughter’s clothes and my running and jumping made them not like me. I was just a puppy.

This is the human daughter that said I was like a dog from hell.

When I got a little older, I quit running and jumping so much because I got fat. My human lady fed me lots of food and treats. She was just showing me how much she loved me. Oh, I forgot to tell you I barked  alot too…at everything.

My barking got so annoying that my really nice human lady bought a blue box that made the awfullest noise. It took a while, but I finally figured out she told that box to make that sound only when I barked. I was so scared of that thing, I ran and hid when I saw it. I was too worried to bark.

One day, when I was about four years old, and it was just the two of us, my nice human lady came home from church and I could tell she wasn’t feeling very well. I stayed right by her and wished there was something I could do. She went to sleep and a little while later, some people took her to the hospital. She never came back home. All of the family came to our house. I heard them say, “I wonder what Sadie did. Poor Sadie must have been beside herself. Whatever shall we do with Sadie?”

My human lady’s son and his wife came all the way from Texas. I wasn’t so sure I liked the human wife at first. She tried to get me to walk around the block. I knew that wasn’t going to happen. When I’d had enough, I just sat down and didn’t budge. She had to pick my little fat self up and carry me home. The next time, we just walked a little ways. That wasn’t so bad.

Well, the human son and his wife put me in my sleeping crate, loaded me up on a big bird and flew me to Texas. I was glad someone took me because I missed my human lady and I realized I needed more humans. I was in for a big surprise.

When we got to their house, another dog greeted us at the door. Talk about wild. She bugged the heck out of me. She was weird too. She ate her food from a bowl that was on sort of a ladder thing. She had to stand on her back feet to reach her bowl. I found out she was born without the muscle to shove her food down her throat so she had to eat this blended up stuff from a bowl up on a ladder or it wouldn’t go down. Guess what? I had to do that, too and I was just a short fat thing. McKenzie (that was her name), was a wiry fox terrier.

Guess what we got for our treat? Yogurt!! I learned to love it.

I hadn’t been in Texas very long when the mailman came and brought a big box to the door. The human son opened it up and guess what was in there? First they pulled out all of my toys and that was good. Then they pulled out that scary blue box that makes a bad sound when I bark, and that was bad. I ran and hid.

I heard the human wife say, “What is that thing. Sadie is scared to death of it.”

The human son said, “It’s that thing Mom was using to train Sadie not to bark. It looks like we won’t even have to push the button. The sight of it will be enough to make her quiet down.” 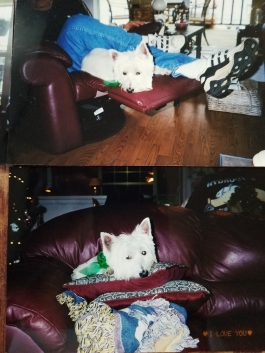 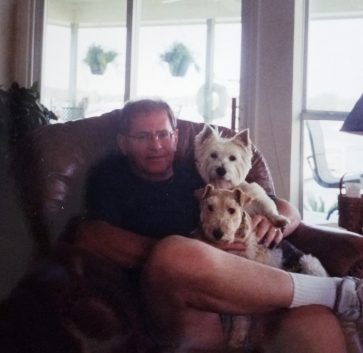 Some of my favorite spots. My super favorite spot was lying up on the back of the couch, but my human wife can’t find any pictures of me there.

I didn’t always act the best, but I was better. I remember one day that didn’t go too well. My new humans had some people over and while they sat around the table and talked, I noticed a bag on the floor beside the stranger lady. I wondered if there was gum in the bag. I loved gum. Well, I had to take everything out before I finally found the gum. I kind of made a game out of it. I hid that stranger lady’s stuff all over the house.

When the stranger lady and stranger man got ready to leave, the lady picked up her bag and there was nothing in it. I didn’t know what to do because I couldn’t remember where I hid all that stuff. I decided not to wait for the blue box. I ran and hid. All the humans scurried around and finally found everything and after the stranger humans left, and my humans settled down a little, I came out. I couldn’t believe they were laughing. I was so happy. I got my gum and didn’t have to face the blue box.

In Texas, you have to have two names. The human son gave me the middle name Ruth which was my lady human’s middle name. They called me Sadie Rue.

As I got older, I had a few health issues. I had to have my ACL repaired twice and I lost most of my teeth. Along about the time I was fourteen I thought I might be headed toward doggie heaven, but it wasn’t my time yet.

When I turned fifteen, my humans had a big birthday party for me. Yes, that’s really me in the picture. The human wife had what she called a photo session with me. I got all kinds of soft bones and no yogurt.

After we blew out the candles on my cake, they put my life jacket on and we went out on the boat. I never let them know I wasn’t crazy about swimming, even with a life jacket on, because I loved being with all my humans.

Sadie Rue left us about six months after the big birthday party. She died the day we went to California for our daughter’s wedding. Kip and I decided to keep it to ourselves until after the wedding, because we knew how much everyone loved Sadie and she wouldn’t have wanted any of the family to be sad that day.

I wish I could have seen the reunion at rainbow bridge, when Sadie met that wonderful human lady in the land where there is no pain, and there are no blue boxes.