Don’t let it be forgot, that once there was a spot, for one brief shining moment that was known as Camelot. . .Camelot? I think not!

An accounting of two years ago…

In July of 2016, it was as if by magic that Murdo became Murdoelot. For us it was a place that time forgot. Cousin Val and I were ‘royalty riding’ on the back of a red convertible in a reunion parade. We were Murdo Girl and her sidekick, Queen E. Val was in her $60.00 crown and lavish purple dress, (which she returned later because the lining wasn’t fit for a queen), and I was decked out in my red Kitty Reynolds’ gown and tinfoil crown. It was a magical time for sure!

If I remember right, people ran into the streets to greet us. They were screaming, “Murdo Girl!” I heard the chant over and over. I can close my eyes and still feel the love. I’m sure Val heard, “Queen E.” a couple of times, too. Both of us continue to relive that brief, but unbelievable experience as often and in as many ways as we possibly can. I even went all the way back to Murdo last summer and visited the convertible now housed in the Pioneer Auto Museum. It is my fervent wish that when I draw my last breath, there will be sufficient funds in my estate to stuff me and sit me on the back of that car. Now that should draw a crowd, don’t you think? Cousin Val can join me, but she’ll have to get a new dress in the meantime. 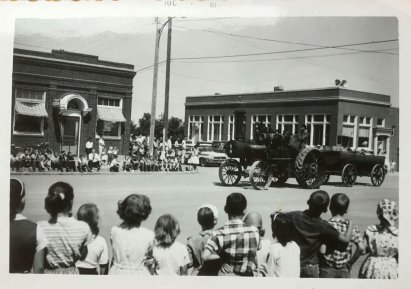 Cousin Valerie on Sanderson’s horse, Rex, (I think) and another parade in Murdo. Both shots taken a lot of years ago.

Anyway, I have other memories of those brief days in Murdoelot. I was standing in the Harold Thune Auditorium still wearing my red gown and crown when someone came up to me and asked for my autograph. I wish I could remember who it was. If you are out there and happen to read this, please know how much it meant to me to sign whatever it was you had me sign.

I took both of these memorabilia shots today. The sign was made by Marilyn and Sam Seymour. I love it! My mascot, Odrum is wearing a 2011 reunion hat.

My other regret of the day was that I didn’t wait for Mrs. Peters to turn around so I could hug her and tell her how much I admire her. Do you think someone told her I was dripping in sweat? 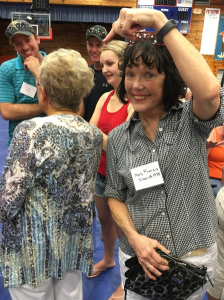 It was hotter than fire in there. I think it was because Coach Applebee made them put a plastic tarp on his precious floor. Sorry Coach…I have a high regard for you too, but that was just weird.

Because I’m Murdo Girl, and I had to remain dignified at all times, I didn’t drink, but I did hang out at the Buffalo Bar quite a lot. I just love crowds surrounding me. I drank so many diet cokes, I didn’t sleep for a week. They have the best steaks in the world there. My brother, Billy, eats one every day when he’s in Murdo. Billy hates diet coke.

Val and I saw our cousins Mark, Andrea, Greg, Jeff H., Terry, and some of their spouses and kids. We spent time with Aunt Elna and Aunt Irma, who just turned 98 last week. It was great to see many old friends and teachers. The Lindquist girls are the sweetest people in the world and lots of fun. Dean’s 80th birthday party was a real blast! Karen, Tammy and Kim are pictured below. 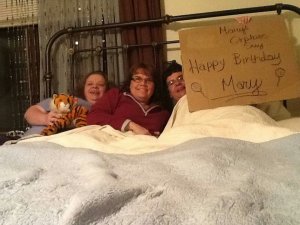 Judy Dykstra Brown presented me with an appropriate gift that I will always treasure, and Patti Dykstra Arnieri gave me a “Betty Crocker Homemaker of Tomorrow” pin to replace the one I lost. Who knew you could get them on Ebay? The Collage includes cooking, writing, a saxophone, music and money. The money represents my banking days. I didn’t have any, but I got to touch it. 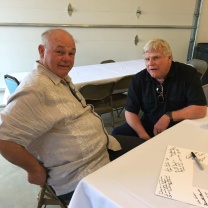 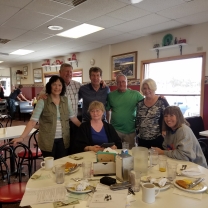 Although they weren’t able to stay up very late, we really enjoyed hanging out with Don Edwards, Eddie Jackson, and Eddie’s adorable and fun wife, Mari. I got to see one of my very best friends, Karen Snider and met her husband, Doug. Karen has always been very grateful that when I moved away, I gave her my job at the Draper State Bank.

My childhood home (You can’t see it.)

I was able to stand on the ground that covers my childhood home. The old basement house is buried under the tree at the Range Country Lodge. Val stayed in room #1. It doubled as the office when my parents owned what was then the Chalet Motel. Val and I reminisced about the times we cleaned that blessed room. I spent many hours in there renting out units and assuring people when they walked in, that it really was the office and not someone’s room.

When we fired up our rented nonconvertible on the day we left, Val and I wiped a tear or two from our eyes. We were only consoled by the fact we got to stay with Cynthia Edwards that night in Rapid City. She has a fabulous karaoke machine. I sang the whole “Four Seasons Greatest Hits” album. That Val can dance and Cynthia can sing and dance.

Well…it’s only three more years until the next Murdo All High School Reunion. Until then, I’ll keep my gown and myself preserved as best I can in hopes that Queen E and I can once again adorn the back of the red convertible and ride the streets of Murdo. Hopefully, we’ll be able to get up there under our own power. Maybe Deuter will drive us around the rather short route, twice.

Let it never be forgot that once there was a spot for one brief shining moment that was known as Murdoelot….plagiarized by Murdo Girl

**The above is all tongue in cheek. I’m really very shy. That’s why I take most of the pictures of me myselfie. I’m too embarrassed to ask someone else to photograph me. I don’t even think about anyone else reading what I write… Do you?