Our daughter and son-in-law were in Tyler over the weekend and decided to go to the movie. When they walked into the theater, three visibly upset, “older” (probably my age), ladies were running out. One rushed up to my daughter and grabbed her arm. She seemed terribly overwrought.

“What movie are you going to see?” She asked.

“Mamma Mia,” my daughter replied. “Did you come to the earlier showing?”

“No!” We came to see a spy movie, but we had to leave after five minutes. I don’t want my Lord to come back and catch me sitting in a movie like that!”

I told my daughter and her husband that I really enjoyed Mamma Mia. I finally admitted that I had gone to see the spy movie, too. I even admitted that I stayed for the whole thing…and I snickered slightly a couple of times.

It was probably the most offensive movie I have ever seen, but I didn’t want to appear rude to the others in the theater, not to mention I paid $11.00 for the movie, popcorn and a coke. I never leave without finishing my popcorn. I eat slowly.

When I was in college, my cousin and I took Grandpa Sanderson to a movie. We told him it was a western because it sounded like one to us. The name of it was, “They Shoot Horses, don’t They?” Have you seen it? It’s about several couples with identity problems who spend the entire movie trying to win a marathon dance contest.

We kept sneaking looks at Grandpa to see his reaction. It never dawned on us to get up and leave. Grandpa fell asleep twenty minutes into it. When we woke him up, he said, “Boy…that was the wildest thing I’ve ever seen, and I didn’t see one horse!”

Grandpa never said a bad word in his life unless he heard someone he admired say it and didn’t know it was bad. (We had to tell him a couple of times not to repeat things unless he knew what the words meant.) Dancing was not his thing either, but he did like horses.

I have to be honest. I hate to miss out on anything. Would I go to a bad or offensive movie just because all of my friends were going? Probably… but I wouldn’t follow them over a cliff. everybody has their limits.

Between you and me, I think a lot of the people I saw in that spy movie knew they weren’t going to see James Bond. It was rather funny watching them stumble out of the movie. It’s hard to see in a dark theater when you’re wearing sunglasses. I saw someone today still wearing them. It’s raining, but those rainbows can be bright! (It wasn’t anyone I know.) 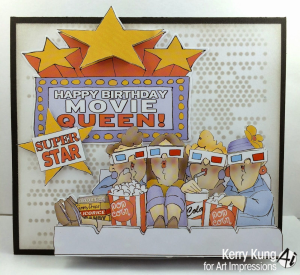 7 thoughts on “Murdo Girl…The movies? Count me in.”