I have recently had three wonderful play-dates with my granddaughter, Charlie. I can’t begin to tell you how much I have learned about how things have changed, and surprisingly, how much they have stayed the same.

For instance, kids still play with Barbie dolls. My friend, Cynthia and I played with our Barbies for hours on end, but Barbie has changed. Her main purpose in life, is not to look good for Ken. Barbie is a veterinarian, or a mountain climber, or a super hero.

It took me until the third round of Barbie to get the courage to ask Charlie if she thought I had learned enough to name my own Barbie and even talk for her. Charlie negotiated with me. If she could be the one to develop the story-line, I could play with, (manage), one Barbie. She didn’t like the name I picked, but she didn’t make me change it. (She bit her tongue a lot.) 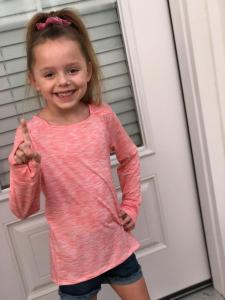 When the story started, we were all in the dungeon of a castle. As we progressed, the story began to sound an awful lot like Beauty and the Beast. The Barbie dressed like a super-hero was bad and she kidnapped three other Barbies, a dog and a little girl and locked them in the dungeon. It was my Barbie’s job to distract the mean Barbie while the others tried to escape. I thought of a great way for all of them to get out, but Charlie said it was too soon. She said we had to keep the story going for a while. When I thought about it, I could see it made sense, so I continued to let the evil Barbie beat up on me while Charlie orchestrated the activities of the other three, plus the little girl and the dog.

In the end, we had a Christmas party because Charlie decided that the evil Barbie was just starved for attention and a few presents would change her attitude…at least for a while. She said to watch her closely because she could turn evil again at any moment.

We had our props set up in the bedroom, and right when it was getting exciting, Kip peaked in. He rolled his eyes a little when he saw we had retrieved a little Christmas tree from the garage, and an infuser that lit up and changed colors. We also had a box we had transformed into stage and another Christmas decoration that played a Johnny Cash song. I think Hudson gave it to Kip last Christmas. All the Barbies danced to “The Ring of Fire” during the finale.

After we cleaned up that mess, we played hide and seek outside. I found I can no longer move quickly enough to find a good hiding spot when the other person only counts to twenty. I cheated and kept moving while Charlie looked for me. Craig, who was outside working on building our front steps, gave us clues when he tired of us trying to get him to tell us where the other one was hiding. Hide and seek was my least favorite thing to play. It’s much more difficult to hide when you’re big. 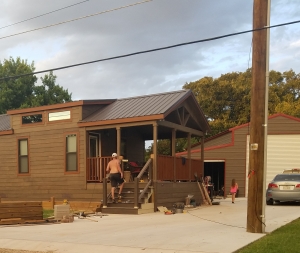 We played Old Maid a bunch, and Go Fish a bigger bunch. We had another board game and we walked the dogs as many times as they would let us. I had six miles on my Vivofit the first day. I didn’t look the second day, but I know it was more.

We put a puzzle together. Unfortunately, I dropped one piece and Sammie chewed it up. 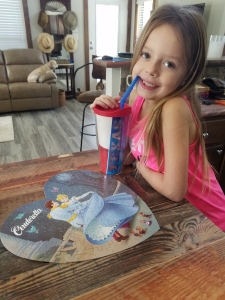 I didn’t take many pictures. I was too busy learning how to play with a pro!

10 thoughts on “Murdo Girl…Six and Sixty-six”