I’m reposting this blog for someone I went to school with during my Connie like days. I heard from Rita today and wanted to share this memory with her…I will post the Victory Lane story tomorrow…

Well, I finally got my Connie like haircut. It’s very short and it’s even cut up around my ears. I shape little backwards curls in front of each ear and tape it down while it dries. I had a problem at first, because I used too much tape and left it on too long. I ended up with big red welts on my cheeks. That hurt a little. I still tape my bangs too. I’m sure that must be how Connie fixes her hair.

I thought I was finally firming up my style, then yesterday a bunch of us were standing in the stairwell outside the girls locker room and Mary Lehr said, “Your hair is really shiny Mary. Have you ever thought about growing it out?” I didn’t know what to think. I just got it cut a week ago! The longest hair on my head is 2 1/2 inches from my scalp. Somehow I felt disappointed. I bet no one has ever said anything like that to Connie Jackson. You wouldn’t believe how much I look like her…except she’s got brown eyes, and she’s a little taller. She’s smarter, prettier, and has a few more Connie like clothes than I do. Other than that, we’re like twins.

I was the victim of a freak accident yesterday. I had a saxophone lesson, and when I came out of the auditorium, it was raining and I got pretty wet. I started down the stairs of the high school to put my horn away in the coat room, and I slipped on the steps. My saxophone and I went end over end all the way down to the bottom. Those steps are concrete and they’ve been painted with slick grey paint.

Everybody was in class when it happened, and I knew the racket my horn and I made must have echoed throughout the school. I expected to see people come running. As soon as I was sure my saxophone and I were okay, I yelled, “IT’S JUST ME.” I don’t know exactly why I yelled that instead of saying “I’m okay,” or just not say anything. I had to go up the stairs and walk into Mrs. Peter’s English class. She just smiled, but another Noname said, “Did you have a nice trip?” Everybody started laughing. I didn’t think it was a bit funny. I could have broken my neck. 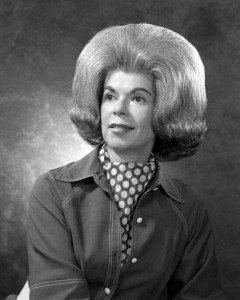 This is how the Draper girls wear their hair

Since freshmen can’t be cheerleaders, I couldn’t try out for that, so I decided to go out for girl’s basketball. I figured since my Dad and brother were good, I must be a natural. Mr. Haugland and Mr. Thune are the coaches.

It turns out I can shoot, but I can’t dribble. I can’t see where I’m going and dribble at the same time. I haven’t even tried to chew gum. In other words, I’m not any good. I was dribbling at practice and Mr. Haugland blew his whistle at me. He said, “What are you going to do with the ball over there Mary…peel it and eat it? I did kind of have myself backed into a corner. We play half-court, so we won’t get so tired I guess. It doesn’t work.

I had one game that gave me hope at first. We played Draper and those girls are mean! I guess it would be nicer if I said aggressive. They have one aggressive girl named Sheila. She’s good, and she’s tough. I had to do a jump ball with her, and I swear she elbowed me and knocked my uncoordinated self on my rear. I did have a good run though and made  4 baskets in a row. After that, I lost the ball 4 times in a row, so I had to sit the rest of the game out. Too bad.

For a girl who considers herself athletic, I’m sure not good at much. I have scratched off tennis, skiing and basketball. You’re probably thinking I don’t stick with anything long enough, but I can figure out pretty fast if I’m going to be any good at something. I think I would be really good in track, but we don’t have girl’s track. (FYI…Connie Jackson is a good basketball player.)

Great form, but isn’t that the ball behind you?

I’m going to start practicing my cheerleader moves so I’ll be ready for tryouts in the spring, but in the meantime, Cynthia Bork is going to teach me how to play the guitar. I’ve already had a couple of lessons. I’ve learned two chords, which is enough to play “The House of the Rising Sun.”

I sing in the choir too. I’m an Alto. I think Mr. Palmer decided that I should be an Alto, because to harmonize you only need to hit three notes. It’s actually pretty boring to be an Alto. I can sing 2nd Soprano too if I stand by someone who’s good. Mr. Palmer even let me sing with a little group for a banquet at the Methodist Church. We sang, “April Showers.” Cynthia Bork, Rita Iversen and Jennifer Iverson were in the group and they all have beautiful singing voices.

Of course, I still play the saxophone, but after my last contest, I don’t know if Sydney will accompany me on the piano again.

That pretty much covers my current extra curricular activities.

You can run, but you can’t hide Draper girl

2 thoughts on “Murdo Girl…Bouncing around”