Having taken to the idea of being a private eye, William now refers to himself as W. Spade. He has also recruited his daughter, MG and his niece, Lav to be his Sherlocks. They do all the legwork.

MG: I like the El Camino, Dad, but why does it say W Spade et al?

W: I was short on space and et al is from a Latin phrase that means, and others. That’s you and Lav. BTW, Lav, you can call me Uncle Bill if you’d like, but I would rather you both call me W. It fits my detective image. Now…do we have a case to crack?

Lav: We don’t know. We’ve spent all day dragging Main. Berferd is supposed to let us know if someone leaves us a message on the answering machine, but isn’t that him running down the alley? 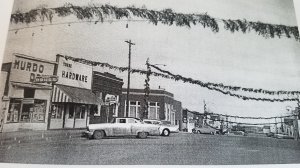 W: Okay, let’s go back to the basement and see if any calls have come in. Remember…we can pick and choose our cases. We’ve only been in business three hours.

As the three investigative professionals pull up to the basement, they are totally unaware of the person watching them from a car parked in front of them in the driveway.

W: I’ll stay here behind this car parked in front of us in the driveway and chew on my cigar while et al goes down and checks the answering machine.

There is a single message on the machine, but in spoofs like this, one good lead is all it takes to move your business to the next level. Lav presses the blinking button. Little does she know the message will be life altering, (Or at least make for an interesting afternoon.)

The voice says, “W. Spade isn’t who you think he is. There will be another clue, tomorrow… Click.”

MG: No, Lav. I mean it’s weird that someone would say W isn’t who we think he is. Let’s go ask him some open-ended questions. That’s how a good detective gets information.

Lav to W: Uncle Bill…who do I think you are?

W: … Listen et al …I think we need to hire an assistant. We’re probably missing out on a lot of business by having Berferd handle the phones. Et…put an ad in the paper. Make sure we hire someone who is independently wealthy, but doesn’t mind working overtime. That’s the secret right there. It also helps if they know people who hang out with bad guys.

MG and Lav momentarily forget all about the mysterious caller. Was W just trying to throw them off his stale cigar scent? Will Click call back tomorrow?

Anyway, they were able to find an assistant. The new girl, Friday, starts Monday…meet E, Murdobird, (the mascot), and we couldn’t find Berferd.