I’ll admit I was a little leary and I had to ask if it was the same chicken and dumplings I’d had the last time I was there. I wanted to know if it had been languishing in her refrigerator since then.

She said,”Well, yes, but it’s practically new. I added more chicken when there was just dumplings left and then more dumplings when I still had chicken, but the dumplings were gone.”

Kip and I do something similar with pumpkin pie. I don’t make it anymore. I buy it at Walmart. We always get a pie and a container of whipped cream about a week before Thanksgiving. By Thanksgiving Day, we’ve eaten all of the pie, but not all the whipped cream, so we buy a couple of more pies and one more whipped cream. We run out of whipped cream first, so back to the store we go for more pie because we can’t waste that perfectly good whipped cream. By Christmas, we’re sick of both of them.

Mom once got on this plum pudding kick. It was more like a dense, dark, fruitcake that she baked in a coffee can. She made something called hard sauce to pour over the top. It’s difficult to describe what it tasted like. All you need to know is it had lard in it and it stuck to the roof of your mouth. 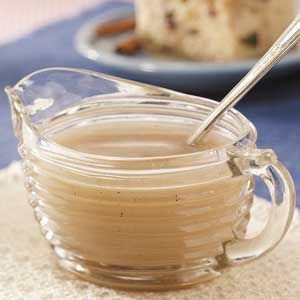 Kip had just met Mom when she placed a big slice of plum pudding with hard sauce in front of him. She sat down at the table with him and watched as he choked down every bite. He decided it must have been some kind of test.

When we lived on the lake, the kids and grandkids came for all the summer holidays. Towards the end of one summer, our grandson, Mike, was there. I had made my special banana pudding that everyone loved. Mike said, “We’re having banana pudding, again?” His mother gave him ‘the look’ so he added, “I’ve had it a lot of times, but I still like it.”

I vowed to make plum pudding with hard sauce the next time. Or I could give him something like this pie I got at an all you can eat cafeteria. The banana was hidden under the filling when I picked it out.

Don’t even get me started on leftovers. I’ll just say nothing goes directly from the plate or pan to the garbage. It has to sit for at least a week in one of the fifteen sizes of plastic containers I use to store them in. I know I’m not alone in this. I always think I’ll make soup with the contents. It’s been several years since I’ve made soup from leftovers, but you never know. I could always add dumplings.