You’ve got to read this…I call it a week in the life of M.E. Sanderson. He was 78 years old when he wrote this letter to his daughter, Helen and her family. Believe it or not I had to condense it…a lot!

It really turned cold here last night, so will take time out to fill you folks in on some of my activities since I last wrote you. Grandma may have told you some of what I’ve been up to but I will start with my Elk hunt in Custer State Park. There are over 17,000 acres of really rough timber, rocks, and canyons out there and I hunted with 20 other men and one woman from all over the state. It was a drawing for 80 permits, and there were 366 applications so I was lucky. I took the camper and drove to the cabin on Sept. 14th and drove to the park on the 15th where we were filled in on how the hunt was supposed to go. I bunked with a nice young man from Mission Hill.

We hunted 2 days before I saw an Elk, but the group got four the first day. About 8:00 a.m. on the 18th I got a fine big bull. We weren’t allowed to shoot cows. I left him in a locker/cooler overnight, and then went to the cabin where I had left the camper as the Methodist Minister and I had permits to hunt antelope at Buffalo on the 26th of September. He met me at the cabin and Friday morning we drove to Buffalo where Dallas Brost and his wife Judy (Iverson) live. We set up the camper in their back yard. Judy insisted we have supper with them.

Dallas set us up for a fine hunt about twenty miles away, but after supper it started to rain and a real SD wind came up. When we went out to bed down in the camper it was leaking and it was sure jumping around in that wind. We crawled in bed with some small canvases over us and tried to stay there for fear the camper would blow away. We stayed until 4 a.m. and it got so bad, we decided to get out before it blew us out of the country.

When things calmed down, we got the camper down and headed for Murdo. The next day after church, I took off for the park where I had the permit for an antelope. The next morning, we took off with the guide at 8:00 a.m. got my antelope and was back to the camp headquarters by noon.

I met brother, Sandy from Mount Vernon, Iowa at the cabin on October 5th. We went back to Wyoming and camped out at a big ranch 4 miles from anywhere. Sandy is a good cook, so we lived high. It froze the water solid in the wash basin one night, but we had good sleeping bags and lots of clothes.

On the 3rd day, I climbed a hill, shot a buck, dressed him out, drug him down the hill, put some short logs under his hind quarters, and put him in some evergreens for shade.

I started to walk the mile down the road to where I thought the jeep was parked, but had never been there before so I got lost and had to climb that mountain again in the dark and take my track back the way I came. I saw two fence posts that I remembered and I sure was glad. Sandy shot his gun off and I did too and we found each other. We had a hard time finding that buck the next day.

Slim and I took the boat out Tuesday and fished at Big Bend and came back with 9 fish.

We had Elk, Venison, Antelope, Duck, Pheasant, Grouse and fish in the freezer. Two weeks later, we went to Chamberlain where I had a permit and was lucky enough to get two Canadian Geese, so I have one in the freezer, now. I’m staying in today for the first time in a long time as it’s still below zero. Mother and I went to Prairie Creek a couple of weeks ago and enjoyed a picnic lunch on the lawn of Junior Cresseys’ cabin where he has a picnic table. The road the road is much better now.

The young doctor in Kadoka has done wonders for Mother. I hurt my back and went right to Midland the next morning where I took a good soak in the hot mineral water and have been feeling fine ever since.

Slim and I trapped a lot of minnows the last few days and have them in a small tank, so we are ready to fish when the weather is fine.

Mother has dinner ready so will close for now. 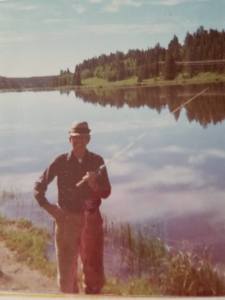