Who would be knocking on the door of the dollmaker’s workshop, Mandy thought as she crossed the room. When she opened the door, she didn’t recognize the man in the wheelchair. Behind him was a nurse who pushed the chair though the doorway. The man looked around the room and then his eyes fell on Aunt Bea.

“Hello sister,” the man said. “You look distraught.” He looked pale and gaunt and his voice was weak, but his eyes were clear as he focused on the sister who was responsible for almost killing him.

Beatrice looked at the man for a brief second, then turned back to focus her attention on her dolls.

“You took two years of my life from me,”Charles continued. “You alone are responsible for the fate of the school children, including my granddaughter. Why Beatrice? What possesed you to stoop to such madness?”

Mandy had only heard about Uncle Charles, but she knew exactly what he was talking about. She looked at Aunt Bea, who spoke next.

“Two years? I never existed at all. I meant nothing to you. I never had a place in your heart, did I Charles?” her speech was slow and measured. “Your precious school children were all you cared about. I couldn’t wait for you to hear they were gone, along with your precious granddaughter. You lost your mind, because you are weak. It didn’t take much to keep you in your stupor. I only had to keep you alive awhile longer, for my plan to work. You see, Andrea was going to be blamed for your death. ” She was silent for a moment, as if mourning the death of her plan. “Oh my,” she lamented. “Do with me what you will, but you will get no satisfaction. You can’t destroy a life that never was.”

Mandy and the nurse watched this exchange in silence.

“We’ll continue this conversation another time,” Charles was getting tired. He was still a long way from good health. “Go back to your room, Beatrice,” he said., “You and I are going on an outing in the morning. Maybe it’s not too late for redemption… for both of us.” As an afterthought, he turned to Mandy. You must be Mandy, my niece’s daughter. Could I ask you to help me to my room?” He turned to the nurse and asked her to help his sister. “And Beatrice,” he said. Please bring your dolls.” 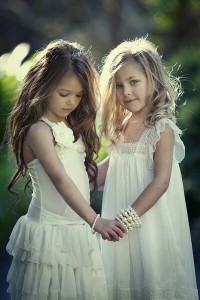 Amanda was coming home. Belle hadn’t seen her daughter in two years. Aunt Beatrice had involved  Amanda’s Father in her scheme to get rid of the children. Belle knew Joseph only carried out the plan because he hated is ex wife. Poor Amanda was ill and her Father had tired of his game. Belle went to The city to see if Amanda was well enough to make the trip back to the estate.

Andrea couldn’t believe all that had happened since her little family had uprooted and moved thousands of miles to start a new life. They had certainly gotten more than they ba

rgained for. Now what? she thought as she went to go find Mandy.

When she got to Mandy’s room, Andrea immediately got concerned. Where was Mandy? Belle had reassured her that she left Mandy with a maid. There was something else that disturbed her…the dolls were all missing. She was about to leave the room in search of Mandy, when Aaron walked in the room. When he started to speak, she told him she didn’t know where their daughter was.

When they got to the bottom of the stairs, they saw someone in a dark cloak leaning heavily on Charles’ nurse. Imagine their surprise when they discovered it was Aunt Bea. They didn’t have time to ask questions, but the nurse did tell them Mandy was with Charles. They hurried to the tower and to Charles’ room. He was resting in bed, and Mandy was sitting at his bedside holding his hand.

“Mommy..Daddy,” Mandy screamed, “You won’t believe who the dollmaker is. She had begun to fill them in on eveything, when Uncle Charles said there was something he needed to tell them. “Belle is on her way to get Amanda,” he said. “She is quite ill, but we’re hoping she will be able to stand the trip home.” He was overcome with emotion. “I thought Belle knew where the other children were, but she doesn’t. I must have been

dreaming in my semi-conscious state. I have this strong feeling they made it to safety and they’re still alive.”

“Uncle Charles,” Andrea sat next to him on the bed. “I would so much like to believe that too, but if they had been found by someone, surely they would have contacted you.The area is so remote. It was searched the day they ran from the bus. They thought even their teacher had abandoned them, and most likely didn’t think they could trust anyone. They were little children.”

Charles looked at his neice beseechingly. “Beatrice and I are going back to the area they were last seen. We’re going tomorrow morning. I want you and Allen to come with us..Mandy too. I feel strongly that God has protected those little ones, and something tells me we should go back there.”

Andrea smiled at her distraught Uncle. “Of course we’ll go with you.” she said.

The driver was in the foyer early the next morning. Andrea insisted the nurse accompany them as well, since neither her Aunt or Uncle were feeling their best. It was a 2 hour drive and thankfully, Mandy slept most of the way. All of the dolls except the Mandy doll were placed between her and Aunt Bea. Mandy was holding the Mandy doll as she slept.

When they got to the clearing in the woods where the nightmare began, they helped Aunt Bea and Uncle Charles into wheel chairs. Thankfully, they were bundled up because it was cold and snowy.

None of us were here that day,”Andrea said. “What is it we should do now Uncle Charles?”

“Where is the Abby Ann doll?” He asked. “Someone please bring her to me.”

“Abby Ann was the first doll I made,” Aunt Bea said. “Even before the Amanda doll.” She then handed Mandy the doll to give to Charles, but before she did Andrea spoke.

“Mandy believes Abby Ann talks to her through the doll. I believe she even talked to me once.”

“You hold her Mandy.” Uncle Charles said. “Abby Ann and Amanda were best friends, but Amanda isn’t here. I rather think that you will be close friends with both girls”

They waited in silence…for what, none of them knew for sure.

“I made the dolls for an evil purpose,” Aunt Bea said. “Abby Ann may be waiting for me to tell them all how sorry I am. They all took on a life of their own. None of them were evil.”

They stayed as long as they could, but it was cold, and it wasn’t good for Bea and Charles to be out too long. They didn’t know what they were waiting for, so they guessed it was time to leave. They were getting settled in the car when they heard a dog bark. They looked around by the trees and saw a beautiful red dog sitting there.

“His name is Beau,” Mandy said. “And he wants us to follow him.

One thought on “The Story of Abby Ann…part 21”