“How would a dog get way out here? We’re miles from any towns or villages, that I know of. I have no idea where he could have come from,” Aaron said.

“Aaron,” Andrea chimed in. “We can’t follow him. Who knows how far he’ll take us, and for that matter, where he wants us to go? We must get Aunt Bea and Uncle Charles home.”

“We’re not going anywhere,” Charles insisted. “I think that dog knows where the children are.”

While they all bantered back and forth, Mandy slowly walked over and knelt by the dog. “See,” she said. “His dog tag says Beau.”

“Be careful Amanda, we don’t know how friendly he is,” Andrea warned. The dog was whimpering, clearly trying to get them to do his bidding.

“There’s only one thing we can do,”Aaron surmised. “I’m dressed warmly. I will stay with Beau while you go get help and take Charles and Beatrice back to the estate. Tell the authorities we’ll probably need snowmobiles or some other way to get through all the rough terrain and trees. And Andrea, it’s probably best you don’t tell them the children were lost two years ago.”

I don’t like leaving you here Aaron, it will take us until mid afternoon to get back to you. I just can’t think of another way, so we’ll do as you say.”

Aaron walked over to Beau and found a stump to sit on. “It’s going to be a long few hours Beau,” he said. ” I sure hope you’re  not sending us on a wild goose chase.”

Abby and the other children were beside themselves with worry. Beau hadn’t returned and it had been three days. Was he harmed by a wild animal or had he tired of the hard life they had to live? No, he was nothing if not loyal. What if he’d gone back to the people he lived with before. He had a tag, but it only said Beau. Abby coudn’t imagine never feeling his soft tongue licking her face again.

The weather had been icy cold and snowy.  Abby needed to take the sled and find more wood. She only had a few hours before it would be dark. She cautioned the other children to stay inside while she was gone, then bundled up as best she could before heading out. They had found three warm jackets, gloves, and boots in the cabin, which they were grateful for, but when the weather was bad, they couldn’t all go outside at the same time.

She hadn’t talked about it to the others yet, but Abby knew they were going to have to leave in the spring. She had to find someone to help them, but how far would they have to go, and who would they meet up with? It still terrified her to think about that day on the bus. The day they lost everything but each other.

They were growing, and they didn’t have enough clothes to wear. It was a miracle that none of them had been seriously ill in all this time. The one she worried about the most was Tony. He needed protheses that fit him.

Andrea asked their driver where they might find the closest police station, or would it be better if they found another source of help that would involve less hassle? They had driven about halfway back to the estate, when off in the distance, she saw what looked like two men on horseback. “Pray everyone,” she said,  “This could be our answer.”

The two horsemen were more than a little surprised to see the small van carrying the driver, two elderly people, a young woman, and a small child. They weren’t close to anything and the weather was less than ideal for an outing. They themselves had been out looking for some missing cattle and were riding back to their truck and horse trailer.

After telling them as much of the truth as she dared, the two men agreed to go back to where she had left Aaron and Beau. Andrea told the van driver to take everyone else home, then to please come back to the clearing and wait. Amazingly, they all agreed to do a she asked. The plan was for her to ride double with one of the men back to their truck. They would load up the horses and take the truck to the clearing. Andrea started to get up on the horse, then quickly went back to the van to get the Abby Ann doll. “We need all the help we can get,” she whispered.

When they arrived at the clearing, Aaron and Beau were waiting. The men let them both warm up in the truck for a bit while they discussed a plan. Finally, they decided that they would follow the dog as far as they could, but they would have to double back in time to get to the truck before dark.

They discussed if they should leave Andrea with the truck, but in the end, the four of them rode the two horses, and Beau ran ahead looking back every few minutes to make sure they were still following him.

Abby left the cabin later than she should have, and  had gone too far in search of wood that wouldn’t take too long to dry. She was so distracted by her worries, she feared that she had gotten lost. “Come on Abby,” she told herself. “You know all the short cuts, and you have been in this direction many times.” The fresh snow had made her disoriented. Abby felt the panic well up inside. She didn’t want to stop, yet she was afraid going on might get her even further from the cabin; where Alice, Andy, and Tony were waiting for her. They would be almost out of wood, and they didn’t even have Beau with them to make them feel safe. Abby sat down on her sled and put her head in her hands, “Please God,” she prayed. “Don’t let them leave the cabin. Don’t let them try to find me.” 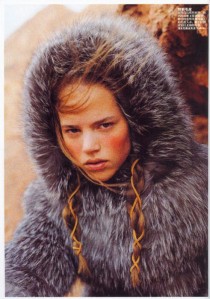