You have to see what I found today. I won’t enter it in the water tower contest, but coincidinks are things meant to be appreciated. Just look..

All of you know how many thousands of pictures I have accumulated since I started writing Murdo Girl. Tonight, I picked up a small photo album that Gus brought when he came for Christmas. This photo was among several more recent snapshots, most of which I had already seen.

The beautiful young woman wearing the fur coat is my Mother. She is holding Billy. This picture is over 70 years old. Maybe one of you Murdo readers will be able to tell me where it was taken. The Murdo water tower is in the reflection of the window, and in Mom’s handwriting on the back it says..Doc Murphy said this is a good picture of the water tower.

This is amazing for several reasons.

1) To state the obvious, I’m collecting photos of water towers. It delighted me to find this one.

2) We lost many of our older family photos when the storage unit Mom and Gus had the pictures stored in flooded.

3) Mom was not a preserver of anything. I can tell this photo barely made the cut. It looks like she spilled her coffee while she was writing the description. I also have a nice 5 x 7 picture of Mom’s very dear friend Sugar and her husband George taken on one of their special anniversaries. Mom wrote her grocery list on the back of it.

I have all of Mom’s old recipe books. Two Methodist Church, and one Jones County Cookbook. Mom’s favorite recipes are dog-eared, but it’s not the recipes I treasure, it’s the entertainment. Mom had all kinds of notes, newspaper clippings and letters tucked between the pages. I found a two page handwritten recipe for soft oatmeal cookies. I purchased all the ingredients, mixed the batter, and was down to the last bit of instructions on how to bake them, when I noticed on the bottom of the second page, she had written, “Emily’s on page ? of the Jones County Cookbook are much better.”

In all fairness, I’m not any better. Inside my Jones County Cookbook, I found a newspaper clipping that Mom had cut out and sent to my son. It was an Ann Lander’s column describing the best way to get rid of blackheads. At the top Mom wrote, “I noticed last time I saw you, you had some breakouts…Try this.”

In the same cookbook, I found another newspaper clipping telling me If I was going to move to Texas, I would need to know how to kill cockroaches. The advice was to place oranges all over the house. Fortunately, I never had the need to try that particular remedy.

Inside my cookbooks I found 2 report cards (Mason), immunization records (Heather), a note from our daughter (Heidi) telling us what she wanted on her hamburger, and birthday cards to various people. I’m sure I didn’t send them because I didn’t remember I put them in the cookbook. Many of the pages of my books are torn out of the binding, but I can never quite manage to put them back in the right sequence. Everytime I make lemon bars, (Mom’s recipe), I have to turn the book upside down and shake the page out that has the recipe on it.

This sample packet of Morton’s Season All has been inside the Methodist Women’s Cookbook for at least 20 years. I’ve never thrown it away because..well, it must still be good. See.. it’s still in the wrapper. I also recently found the warranty for a Rival crock-pot I haven’t had for probably 15 years. 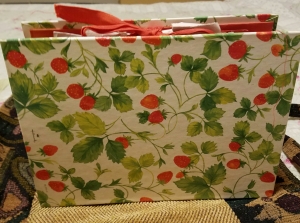 This is the recipe file my Aunt Elna Miller gave me 40 years ago. It’s been a while since I’ve looked inside. I found a story in there that was written by my son in 1989. Maybe I saved it because he got an A+. I guess it’s not a story, but it’s a pretty good read.

Next, I found a picture of Aunt Elna, Mom and Grandma Sanderson. I haven’t seen it since around 1989. (I would guess.)

I know this post is later than usual, and I never got around to writing the next Connie Story, because I was too busy looking for a recipe I can’t find.

Note to cousin Valerie: I found a recipe for Ella’s rolls. Do you have it?