Yolie is Pearl with the huge round glasses and smoking air cigarettes, and Jean is Great Aunt Grace who keeps her shoes on with big rubber bands.

When Kip and I moved to Texas in 1987, my Uncle Jeff Sanderson told us we must look up Grandma’s sister who lived in Dallas. He gave me her address, which I put in a safe place. (I lost it.) I had never heard of her and I was busy getting kids settled in a new school. Kip and I had both transferred with our companies, but the change from Denver to Dallas was hard on all of us at first. We had lived near Kip’s family and I knew I was going to miss having them close by.

A few months after we moved, Mom and Gus came from California for a visit. Uncle Jeff had told Mom about Aunt Grace too, and she wanted to go see her, so we did.

When Grace opened the door to her tiny apartment, Mom and I were speechless. Well, I was…Mom recovered quickly. Neither of us could believe how much Aunt Grace looked like Grandma, who had passed away almost 20 years before.
The other interesting thing is Grandma was 20 years older than Grace. Grandma was 28 when she married Grandpa Sanderson and moved away. They were both born and raised in Iowa, but after they married they came to SD.

Grandma and Grandpa, M.E. and Mary Sanderson, are on the right. Mary is holding Ella (cousin Valerie’s mother), and the little boy is Wayne Sanderson (Terry Sanderson’s dad). Valerie emailed these pics to me on short notice.

Grace had never spent much time with her sister, my Grandma Mary, and said she didn’t remember her that well. Even so, she looked and sounded very much like Grandma did.
Mom and I loved it! It was almost like being with Grandma. Grace was a little contrary, but she warmed up to us after a while.

Like Grandma, Grace weighed about 80 lbs and was no taller than 5 ft. She had wrinkles in her nylon stockings and wore a housedress and a hairnet. I noticed Grace didn’t wear beads though, and Grandma was never without them.

Grandma in front of her house. The Bork family lived in the yellow house behind her.

Grace lived alone, but was very self sufficient. She rode the bus to the grocery store several times a week. She told me she no longer went if the wind was blowing hard because she got caught in it once and it blew her way down the street. By the time she collected the groceries she had dropped, she missed the bus and had to wait an hour for the next one.

Grace had outlived her husband, daughter, and son. The only family she had left was a grandson. I never met David, but Grace spoke highly of him and I know he helped her and checked on her frequently.

Like Great Aunt Grace in Connie’s story, Grandma’s little sister wore little ballet flats held onto her feet by rubber bands. She had pictures and cards she had received, scotch taped to her wall. She told us about losing her family as she showed us their pictures, but she didn’t dwell on the sadness.

Mom and Gus went back to California and I didn’t see Aunt Grace for a while. She had a telephone, but she never answered it. One Sunday after church Kip, the boys and I drove over to see if Grace wanted to go out to breakfast with us. It was noon by the time we got to her house and convinced her to come along, so we decided to go to Luby’s Cafeteria instead of a place that served breakfast. Aunt Grace loved Luby’s. Over the next several months we drove over to her place one or two Sundays a month to take her to Luby’s.

One Sunday after we picked up Aunt Grace, Kip changed the plan. He wanted to go someplace for breakfast. Grace didn’t like that plan at all. She turned to me and in a loud voice that she knew Kip would hear, she said, “Why doesn’t your man like Luby’s?” That is exactly the kind of thing Grandma Sanderson would have said. It was always about the men. “What are you going to feed the men?” She would ask.

Kip took us to Luby’s that Sunday. They had a lady there that day playing the piano and Grace lit up like a Christmas tree.

School started shortly after that and things got busy. We didn’t see Aunt Grace for a couple of months. As Thanksgiving drew near, I thought about her and wondered what she might be doing. I was pretty sure her grandson would do something with her for the holiday, but I wanted to extend the invitation to join us, so Kip and I drove over there one day after work. I knocked on her door several times before a lady in the apartment next door came out and asked if she could help me. When I told her I was looking for Aunt Grace, she very gently told me she had become ill and had passed away the week before. She said Grace’s grandson had been with her. She asked me to wait a minute and went back into her apartment. When she came back out, she handed me a piece of paper with the grandson’s number written on it.

When I got home, I called the number and talked to David. He was very sweet. He said he knew we had spent several Sundays with Grace and she had told him she really enjoyed going to Luby’s with us.

It was sad to lose her so soon after meeting her, but I’m glad we had that time with Grandma’s little sister. They were alike in so many ways and it made our move, that took us so far away from family a little easier.

You never know when someone special might come into your life or how long they will be there, but there will come a time when you will understand what a gift they were.

Kip and I and the animals are settled into a spot in the beautiful little town of Rushford, Minnesota. Tomorrow we are going to see the farm that his mother’s parents homesteaded. We’ve visited each of our hometowns this trip and now we’ll go back another generation. We love where we’ve been and we’re excited about where we’re going. 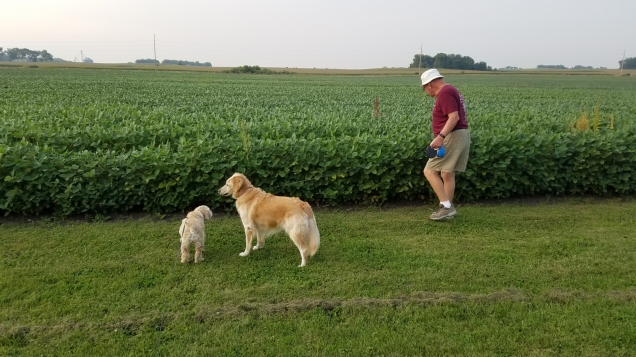 There will be no shortage of green beans this year.

The first photo was taken as we were leaving the RV park this morning. I can’t wait to post pictures of Rushford, Houston, MN and the farm tomorrow.

**I’m still assimilating information on the last of the Murdo visit stories.