Monday we will be four weeks into our epic journey and each day has been different than we thought it would be, but It’s all been good.

Kip and I have been to his hometown of Laramie, Wyoming, and my beloved hometown of Murdo, South Dakota. We have visited four cemetaries, seen most of the Black Hills, driven through the Badlands, saw Palo Duro Canyon, visited with good friends and some of our family, and the best part is…WE STILL HAVE FOUR WEEKS TO GO!

(It was raining this morning, so I got to wear my new rain boots. The day turned out to be beautiful, so they got a little hot by the afternoon.) 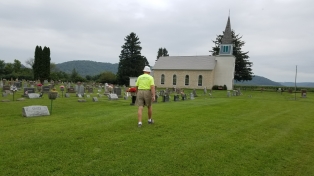 (Uh Oh…looks like I was wrong. Grandma died in April of 1969. She was 14 yrs older than her sister Grace. There were 13 children born in her family. Though some did not live, 24 years separated the oldest and the youngest.)

With the hometown visits behind us, we are now going back another generation. We are in Rushford, Minnesota, which is close to the farm Kip’s great grandparents homesteaded outside of Houston, MN. The farm remained in the family as Kip’s grandparents eventually took it over. Kip and his sisters all have fond memories of going to the farm each summer during their parents two week vacations.

Kip was thirteen the last time he was here, so it was sixty years ago. His youngest sister, Karlyce, was last here about twenty years ago. Time has a way of changing things, and I was a little worried that Kip would be disappointed in what he was about to see.

(We had lunch at a little place in Houston that only offered gourmet hotdogs and donuts. These were as delicious as they look! Many of the town’s people are of German or Scandinavian descent.)

Kip’s Uncle Paul had also lived on the farm most of his life and after the grandparents died, Kip’s mom decided the place should be Paul’s to do with as he wished. When Paul passed away he left the farm to his nephew. The land is still being farmed, but the house and outbuildings haven’t been in use for years. Karlyce, who was the one most attached to the farm, didn’t fully realize this and neither did Kip until today.

(This is one of the barns. When Kip’s great grandparents first homesteaded the property, they made a living area in the part of the building below ground while they built the house. I love this picture. Kip remembers the windmill turning continuously. The blades are now gone.

We drove by the farm three times and called Karlyce twice before Kip could make the house and buildings match his memories at all, but eventually, he adjusted his thinking. When you don’t see something for sixty years, your mind only knows what it saw last.

We stayed for quite a while. We walked around and took pictures and Kip began to remember things. These old buildings had a story to tell, and they deserved to tell it.

“I remember when I was about six or seven I killed a little garter snake with a hoe. I thought I was really a tough guy, because I really cut him up good,” Kip said. “Later… at supper, Grandma started talking about all the good things garter snakes do. She said they keep mice and other varmints away.”

Kip said he felt just terrible and couldn’t get over the guilt for years. He still has more compassion for animals than anyone I know.

The condition of the house was the hardest for Kip to reconcile. Then he pointed to the back of the house where his grandma had a summer kitchen. She could fix meals without heating up the rest of the house during the hot and humid months. He remembered sleeping in the bedrooms upstairs.

We have the beautiful chandelier that used to hang in the dining room.

Kip described in detail how the farm worked. His Grandpa Nels was proud of his cornfields, and the way he terraced his fields. There was a road that went to the top of the hill behind the house where there was another large cornfield. Kip remembers seeing pictures of his Grandpa with corn eight and nine feet tall.

Kip’s mom got very upset with Grandpa Nels when he cut down several trees so he could see the Root River that meanders through the whole area.

They also had chickens to sell, in one of the buildings and chickens to lay eggs in a separate chicken coop. Once he and his sister, Karen, found over a hundred eggs the chickens had laid in a hidden place. His grandma couldn’t use or sell them, because most of them couldn’t possibly be fresh. 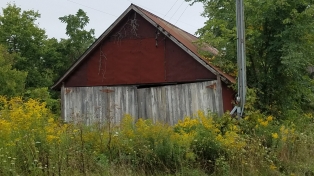 It was a day filled with great memories of family history beginning with great grandparents to present day. Memories are so important and should be cherished. Family history should be kept alive by passing our stories and memories from one generation to another. Our families and their experiences helped make us who we are today. Places may not always look the same, but the earth pretty much stays where it’s always been.

Remember my story about all the fun things we did under Grandpa Sanderson’s trees? When we were in Murdo Kip and I drove south of sixteen and I took a picture of where I had so much fun. It didn’t look the same, but it was the exact location… where a bunch of cousins and friends got to be kids having lots of fun together.