Murdo Girl is up early. Actually, she hardly got any sleep. Counting sheep didn’t help because she kept seeing those mangy big horn sheep that live in the Real Bad Lands. That wasn’t very sleep inducing.

The gang had only been there one night and they were all getting bored. A bored MG was one thing, but a bored gang was yet another. They couldn’t go on the twenty-four scenic drives because the Cowboy was the only one with transportation. They’d been to all the scenic overlooks they could walk to, and the hiking trails were out of the question. MG was beginning to feel a sense of forbording. That’s the feeling you get right before boredom sets in. It’s different than foreboding Then there’s the afterbording. After, afterbording… boredom is pretty much irreversible. MG’s right eye began to twitch.

Uh, Oh…here comes the biggest complainer of all.

Queen E: Did you know that the temperature in the Real Bad Lands ranges from 116 to minus 40? I like to dress in layers. That way I can remove an item of clothing as the weather warms up.

Hedda and Hopper (overhearing the Queen): Did you say you take off an item of clothing every time it gets a few degrees warmer? What do you call that game? It sounds like fun. Do you play with chips? Do you have to put your clothes back on if it starts getting colder or can we bring a hot toddy.

Here comes the next biggest complainer, the town crier.

MG: Hi TC…what are you boo hooing about this time?

TC: (sniff) Some starving and vicious wild animal stole my brand new cheese head. I think it was a wolf or a puma. It might have been a panther or a coyote. I put it in a safe place too. It was on my head.

PG: (aka, Sherri the drawer). Oh, quiet down TC. I saw a prairie dog run off with it.

Why do you squeeze Squeeze’s head so hard, TC? It might be like a pimple and burst. 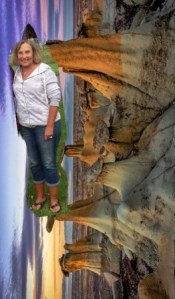 Squeeze: It already did twice, but it grew back. Are you stuck on those rocks, PG or are you floating around in the sky?

Lav: Sorry I’m late…jet lag from my trip to Europe! I overslept. I had this terrible nightmare that I was in this horrible place with snakes and groundhogs and a gang of something. It was so terrible and I…(as she looks around and sees everybody staring at her)…What?

MG: Yes, we know you went to Europe, Lav. Now, I have something to tell all of you…what KK?

KK: I want to change my name MG. I’ve outgrown Kodak Kadoka. I’m not in amateur town anymore, if you catch my meaning.

MG: No KK. I don’t know what you mean. You don’t outgrow your name…do you?

KK: Sure you do MG; especially if it’s a name like Kodak Kadoka. Look at Cassius Clay…he was a CC before he became Muhammad Ali.

Surissuse: Surissuse It’s short for sunrise, sunset. I have a new look too. I’m going to float like a butterfly.

AI: We don’t like our heads up here in the clouds. There’s a strange person up here just floating around…says her name is Surissuse.

Patticake: Cherry pie anyone? Today I made it shaped like a cake with cherries on top…clever huh?

The Cowboy : Well, this is the last time I’ll take a transportationless, foodless, moneyless gang to the Real Bad Lands. They’re all a bunch of whiners. 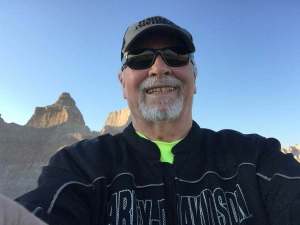 The Phantom Wrangler: I hear ya Cowboy. This is the last time I’ll join a gang. I thought I was going to be in a real bad outlaw gang. I’d rather wear a white hat. If you’re looking for a phantom wrangler, I’ll be on the right side of the law from now on. 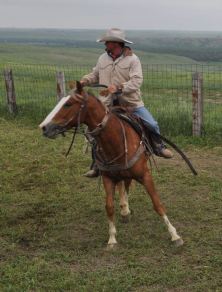 Matt: You’re on MY left Doc…he’s on MY right. Looks like he’s riding off.

Wait cute phantom! We’re floating as fast as we can.