When we were getting ready to leave on our last long RV trip, my cousin Valerie’s husband, Ken thought we should keep track of the top ten things people talked to us about while we were out walking the dogs. He said it didn’t necessarily have to be questions they asked about the dogs, or even walking. I guess he was just curious about what we motor home wanderers do while we’re all wandering around the campgrounds.

I told Valerie that Kip and I would keep track and I would let Ken know the top ten after we got back, and then they left on a long trip overseas so I waited. I know he thought we forgot, but we remembered.

Ken and Val in Europe. We have just as much fun, but they might have better food.

These people are the kind who feel they have to say something; especially if they’ve already made eye contact. We always say, “They love it!” Another possible answer might be: “We took them to the dealership and let them sleep on the RV couches for a couple of days before we decided what to buy.” Then I could tell them Kip tricked us all and replaced the couches with electric, remote control recliners. Have you ever seen a dog try to work a remote? It’s kind of sad.

2. Is the big dog the mother to the two little dogs?

Remarkably, this questions is often asked by adults. We have a golden retriever and two little cocker spaniels. Cyndie is about five years younger than the cockers.

3. An office manager asked us this as we were checking in: So you have three dogs? Kip: Yes, but how did you know? Office manager: The big one is in the driver’s seat and the other two are in the passenger’s seat. We better hurry. It looks like they might take off. 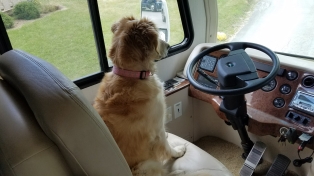 4. This should have been number one: Ooooh, we have a retriever that looks just like yours. Can I pet her? I had to leave mine at home and I miss her so much! I would go back home right now if I could. 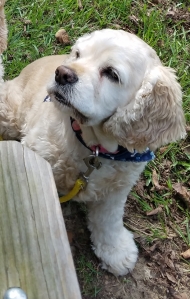 On this last trip we were pulled over on a scenic overlook way up high on the Blue Ridge Parkway when a car came flying in there, pulled up to where we were standing and came to a screeching halt. A lady was driving and her husband was in the passenger seat. The lady jumped out of the car and came running over to us. She knelt down beside Pattie and hugged her and petted her. It was a few minutes before she could talk because she was crying. She told us she had just lost her cocker spaniel, Muffin, and she had looked just like this one, (Patti). She had her for twelve years before she died. She talked a while longer before she told us seeing Pattie had made the whole trip she and her husband were on worth it. (I’m crying as I’m typing this. Dog lovers are a special kind of people.)

Cyndie Loves me….I like to travel can we go now?

You wouldn’t believe how many campers have dogs that look just like Cyndie, or Pattie, or Sammie. I don’t get why they don’t bring them along on the trip.

5. One morning a lady carrying a little bundle of something about as big as her hand, surprised our dogs when she came around the corner. Our dogs started doing their combo crying/barking thing. The lady very seriously said her dog wouldn’t try to hurt our dogs, she just wanted to play. I was embarrassed for our dogs. The woman sounded like she was really trying to convince us that her little teacup wouldn’t hurt our big baby dogs.

I don’t like our dumb old cat, Mommy. (We usually try to escape sometime in the middle of this discussion.)

7. A couple of people have asked, “On average, how many of those doggie poop bags do you go through a day, a week, or a month?”

8. This doesn’t happen while walking of course, but many of the friends and relatives we’re going to visit come close to insisting that we stay with them. I know they are trying to be good hosts and hostesses, but that is the beauty of traveling in a motor home. You get to go to your own home at night and operate the electric recliners for the dogs. 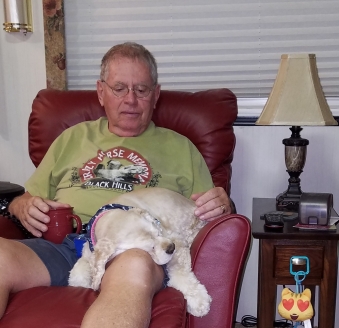 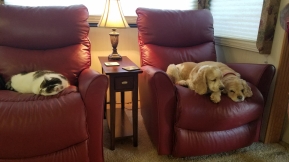 9. We try very hard to obey the rules of the RV Park. We usually try to be parked and set-up early enough to take the dogs for a walk before dark. One night we were late, and it was dark, and we were rushed. One of the dogs did her duty and we were trying to see where it was. A woman yelled out, “How are you going to clean up after your dog without a flashlight? You’re just going to leave that there aren’t you?”

There’s always that one out of a hundred that needs to get a life.

10. Most campers are relaxed and happy. Several have invited us to their picnics, and will let us know if they see something wrong. Kip has helped other campers make minor repairs, too. 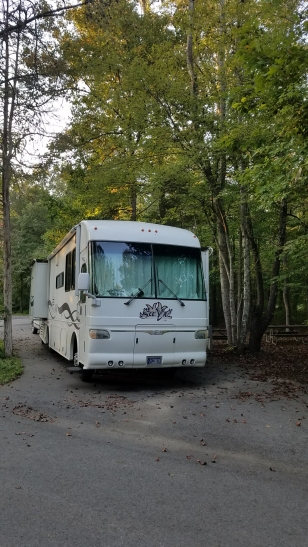 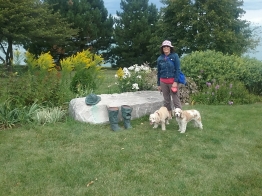 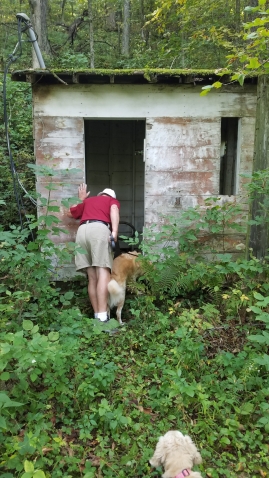 If I had a million dollars, I would still want to camp. I would just have a bigger motor home…one that’s big enough for three dogs, one cat, and two people to sit up off the floor.