Well, I’m on my way over to Pearl the human’s. I know you want to hear all about the pep rally fundraiser we had yesterday, but I just don’t feel like I can put it into words. If you really want to know about it, go to Sanderson’s Store and buy yourself a Murdo Coyote Newspaper. I hear that new reporter they hired didn’t miss a thing. She even dug up the whole story behind the big feud between Pearl and Queenie. It’s in the fine print.

It was one of those, “You had to be there,” kinda gatherings. All attendees, including this reporter, couldn’t believe what they saw with their very own peepers.

It was wild from the get go. Queenie and Pearl each made a grandiose entrance. Queenie had Mr. Bradley Crandall on one side of her, and the illustrious owner of the Auto Museum on the other, which put Pearl, (who was accompanied by Pearl the Coyote-dog mascot and her longtime friend, Grace who was obviously still in pain from a broken tailbone), at an awkward disadvantage. You see Pearl is raffling off a red convertible from the auto museum, unbeknownst to the owner, who lo and behold was, as reported earlier, riding in Queenie’s car.

The whole event was planned  by Pearl and unbeknownst to her, it was a brilliant plan. Get this! There was an invitational basketball tournament in progress at the auditorium, so there was a huge crowd who soon got wind of the raffle and were more interested in who got the car than the jump ball.

Pearl marched in there with her, made specially for pep rally, purses and set up for business in the lobby.

Queenie set up a pep rally hat stand right beside her.

Then things got crazy. The hats, purses, and band uniform contest got all discombobulated.

Who could decide between Pearl’s purse and Queenie’s pom-pom hat? 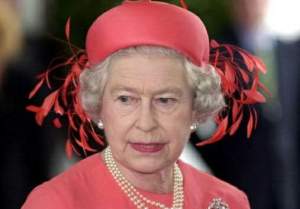 The band uniform competition was close. In the end, it was decided the old uniforms weren’t so bad. 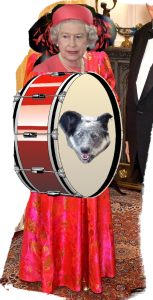 Not having to buy new uniforms was a good thing since the merchants were only able to sell $178.00 in tickets, which not only disturbed Pearl, but the owner of the car who didn’t know it was being raffled off.

Mr. G said, “What were you thinking, Pearl?”

Pearl said, “I was just trying to help Queenie, the PTA president, raise money for the not so much needed band uniforms.”

Queenie said, “Since when did you want to help me. I remember when you thought PTA meant, Pass the Appetizers. You brought cheese fondue to our meeting instead of cookies!”

Mr. G, “YOU’RE the one who brought that delicious fondue? Well, Pearl…your heart was in the right place, and a deal is a deal. Go ahead with the drawing.

And the winner is! Who? Someone from Ft. Pierre?

The girls scratched the pep rally. In fact, they both went into the ladie’s room and didn’t come out for the duration. I know one of them is going to be devastated by the loss and the girl from Pierre might have a new best friend.

Signing off for now, your traveling within 8.5 square miles reporter, PG for MCN.

“Can I go for another ride in the red convertible?”