I’ve been taking a lot of days off, haven’t I? It’s because I’ve been working on some other projects that are causing me to pull my hair out. I stay up late, get up early and never stop in between. At this age, you would think my life would settle down, but it won’t until I do. I worry that I’m not spending my time on the right things. I think it’s called prioritizing. Yes…I’m pretty sure that’s what you call it.

A friend of mine commented about having a nightmare that caused her to be claustrophobic in her sleep. I think the dream was directly related to her life. She spent her day pretending she was a queen. She didn’t have a convertible, so she decided a car with a sunroof would be a good substitute. She has a friend who is willing to try hair brain ideas with her, but only one had the nightmare.

I had a nightmare too. It was so real, that I woke up in a cold sweat. I dreamed all of my teeth turned to powder. It started in the front. My two front teeth began to disintegrate. It happened so fast, I couldn’t do anything about it. I felt inside my mouth and I only had tiny little stubs where there used to be teeth, and I had white powder all over me. Okay, maybe the powder had just a hint of yellow in it.)

I woke up about then, and my hands flew to my mouth and I discovered I still had all of my teeth. I vowed to call the dentist and make an appointment. I would rather take a beating than go to the dentist, but I believe that vivid dreams are your subconscious trying to tell you something, and mine was telling me to make that call.

That was three days ago. I still haven’t called, but I haven’t had anymore nightmares and I still have all of my teeth. I guess it might be a little like a foxhole prayer. When the crisis is over, the anxiety lessens and procrastination sets in.

My second father, Gus, reads the blog, so he’ll keep me honest, but I remember Mom telling me she took the car one day to go get donuts. This was several years after they moved to California. Anyway, she thought she knew where the donut shop was and intended to take the side streets, but accidentally got onto the freeway. She said she promised God if he got her off of that freeway, she would never drive again. I think she ended the story by saying, “And I didn’t.” It could be that I have embellished the story for a few years and now I believe it. I’ll let you know what Gus says. 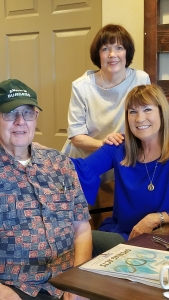 Speaking of Gus, I want to write about his years in the service for Memorial Day. I know he served during the Korean War, but I’m going to try to interview him on the phone to learn more about his experiences. I read that thirty-six thousand Americans died in that conflict. Gus was only nineteen in 1950 when the war started, but I don’t think he had to go overseas. He’s a proud veteran and has done a lot with, and for, the American Legion.

I hope you all are having a good beginning of the long weekend. The kids are out of school and I’m sure the lake will be busy. I can hear all the firecrackers going off right now.

I had my friend Judy over for a fun lunch today. My first guest in the tiny home. We ate chicken caesar salad, fresh bread, fresh strawberries, and lemon cake. I sure know where to buy good stuff. I was going to fry a turkey in my new turkey fryer and make homemade ice cream, but time just got away from me…maybe tomorrow.

We had such a good time visiting, I forgot to take a picture of her. 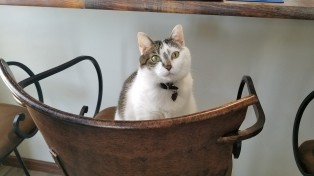 Time to shut her down for the night. Sweet dreams everyone!

4 thoughts on “Murdo Girl…Keep calm and cheer on…”