A beauty to behold;

Each thread a chapter of a life.

There within the richness,

Are tears of golden hue;

While silver threads of laughter,

Are gently woven through.

Hanging there in splendor for all the world to see;

The beauty of a life well spent, in richest tapestry.

As part of our journey into the world of minimalist living, we have been planning a family day to go through things Kip and I no longer need or have room for in our tiny home. We felt our family should be given the chance to take a look inside the boxes and keep anything that was meaningful to them.

Today was just the beginning of the process. We realized rather quickly that this couldn’t be done in one day. As it was, it took a few of us some time to get with the program and deal with all of the mementos and photographs that represent our individual and collective ties to the past.

It was an amazing day to witness and be a part of. I will write a blog about the fun, funny, and awesome moments of discovery, tomorrow, but tonight, I want to share some photos from one album that has been hidden in a box stored in the attics of the different homes we have lived in over the years. It’s full of photographs from the 1940’s. Someone else’s memories.

My Grandma, Mary Sanderson, with her daughter, Ella, in California. Grandma traveled from South Dakota to California by herself. She was hoping to get there before her son, Jeff shipped out. She didn’t make it in time and my mother told me she wouldn’t look at the ocean the whole time she was there because it took her Jeff away. Jeff is on the right in the second picture. I don’t know who the other two men are, or the baby. They are standing in front of a fountain, which may have been in California or wherever they were stationed. 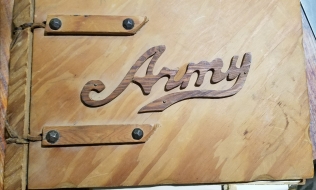 From the left in the bottom picture is my dad’s brother, John, and his wife Margaret. I don’t recognize the tall man. Standing to the right of him, is Ella Sanderson, Bill Francis, and my mother, Loretta. I don’t know the blond lady next to Dad in the second picture with Ella, Mom, and Margaret. 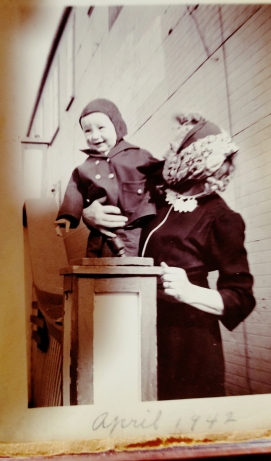 Grandma Sanderson with her oldest grandson, Terry. It says April, 1942 on the bottom. This must have been taken in Murdo. Grandpa, (M.E.) Sanderson is in the second photo. It looks like he is in the Black Hills. I’m not sure when he purchased his cabin there.

This picture of Bob Haverberg was in the album. He married my mother’s sister, Helen Sanderson. I was struck by how much his son, (my cousin, Bobby), looks like him.

I loved looking at pictures of my family when they were just beginning their adult years. I wish I had asked more questions about their lives back then. Wartime was full of uncertainties. These young South Dakota men and women went places that I’ve never been. They met new people, some of which became lifelong friends. I remember Mom talking about someone she called, Skeeterbumpererguypalschmidt. I’m not kidding. She and her husband lived in Merced, California. They kept up with each other for quite a few years.

This probably isn’t of too much interest to my blog readers who aren’t like me. I love looking at old pictures no matter who is in them.

In this case, I know how the tapestry of most of the lives of the people pictured above unfolded. There were silver threads of joy, and tears of golden hue…each of us has our own unique tapestry. Some are more golden, and some have more silver threads.

Looking through this album, I saw moments in time captured…just waiting for me to see them.

I’m going to show you a few priceless pictures that were taken today…Yes… that long lost teddy bear was Kip’s childhood friend. Hudson fell in love with him. 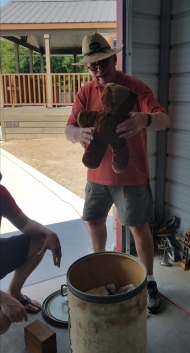