APB Presser: The following is an exclusive report obtained by Yram Sicnarf, Crack-Up Reporter, as run in/on all of the national publications, a few tweets, gossip rags, and of course several facebook walls. (Pinterest had no interest and the Queen did not return Yram’s calls.) Billy wrote this, himself…

The selection committee, in a 5 to 4 vote, picked Murdo Girl’s BD Card over LAV’s Card.  However, within minutes the LAV camp filed an official protest, citing possible “collusion” and “excessive lobbying efforts” by the Murdo Girl’s camp.  The contest rules state that an independent arbitrator be selected to make the final ruling.

The arbitrator, after reviewing the file and hearing testimony from both parties, ruled in favor of Murdo Girl.  In the arbitrator’s opinion he (or she) writes that there was no collusion.  The arbitrator did find evidence of lobbying on Murdo Girl’s part, although he/she determined that the lobbying was not “excessive.”
This reporter noted that the number of entries was down from previous years, possibly due to Mr. Francis’ retirement last January.  It seems that there may have been “excessive” encouragement of former employees in the past to submit entries. 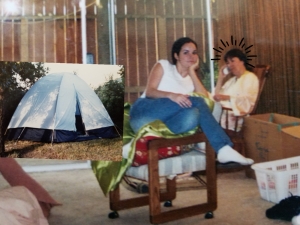 It appears that Lav Yekcel is receiving the dreaded news. Her crown has already lost it’s luster. Is she leaving town?

We think Lav is in seclusion. Her daughter, Caitlin, has been spotted with her mother’s cousin, Billy. Billy has also been seen with Lav’s good friend, Murdoite, Suzanne Brost. What conclusions are we to draw from this? Oh, wait! That picture was taken at the Boulder Boulder in 1995. It appears, Murdo Girl, who was standing on the other side of Suzanne, was cut out of the picture…

Meanwhile, Murdo Girl is celebrating with some childhood friends.

I’m going out early tomorrow to shop for a card. I have hired an independent consultant(who looks a lot like the wicked witch of the east/west whatever from The Wizard of Oz) to offer her opinions and channel her anger into the constant search for mean and nasty cards – not dirty ones. The quest continues.

Mary- where did you say you’re taking the committee to dinner? I concede for now.
Val
MG:  Yeah, right…(My card wasn’t dirty, either.)
Someone overeavesdropped and heard the following:
MG: Oh Yay!! I can’t wait to announce this prestigious win on the Murdo Girl blog! Do you mind if I leave out the part about the lack of competition? And can you tell me what put me over the top? Was it the whining or was it the already been scratched off, net zero, bingo lottery ticket? Maybe it was the unique postage stamps…one other question. May I ask who makes up the jaw droppingly astute committee that picked me? I’d like to send them a card.
Speaking of cards, I’m sure glad I didn’t buy a new one. I bought the Bigfoot card for a guy who left town unexpectedly before his birthday.
Love you Bill (Billy) I can’t believe I have a whole year to bask in this big win!