It only takes a moment for a moment to be gone.

Time will not stand still, though we keep trying to hold on.

“Time Out!” We want to beckon!

Alas…a camera is our weapon.

Someone took a moment to take a photograph

Of my mother and her sisters. It always makes me laugh.

She’s in overalls… Her hazel eyes squint to peek

From beneath her hat as she stands there at Horse Creek.

The Homecoming King and Queen of nineteen-sixty looked so royal

In crowns made from cardboard and covered in tinfoil.

My brother Billy got to drive them in this classic car.

This captured moment has lasted fifty-eight years, so far.

Summer fun with family. This picture taken long ago

makes it all come back to me. I see a friend I treasured so.

The summer of sixty-six, we almost never were apart.

She died far too young. When I heard, it broke my heart.

Ione Webb, Pat Rada, Marlene Rada, (Ione was married to Bob Webb, but this looks more like Jack Richards), I’m not sure who the two little ones are. This was taken in 1963, the year after Marlene’s brother, Earl, and my brother, Billy, went to California. They left the day after they graduated.

Look back at the Horse Creek picture. I’m sure you know the one.

That little girl in coveralls grew up and had a son.

Her baby sister, Elna, is shown in the picture below

Having coffee with her sister’s son, about thirty-two years ago.

I’m sure you all have photographs that you’ll forever treasure.

I have thousands I look through. They bring me so much pleasure.

Reminders of moments, captured with a camera’s eye. 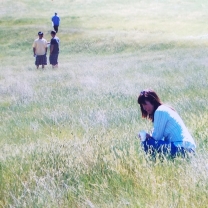