I hope the soon to be released production of the promised Combo Awards Show brings you a laugh or two, because we cracked up all the way through it. Poor MG has been trying to recreate her days as a young queen. Can you imagine how important she felt sitting in that horse-drawn wagon in a 4th of July parade? She later had the honor of being Murdo High School’s Homecoming Queen…that was forty-nine years ago. If you ask me that’s a long time to recreate. This production should put the whole thing to bed. Let’s hope so. 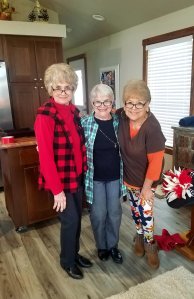 The Judge, aka Pie Lady, aka Church Lady, aka Airy, has played an important role judging pies at the Texas State Fair. On the flip side, she has been known to talk the police, (who occasionally stop her for speeding), out of a ticket by telling them she sings in the choir and is distressed because she forgot her music at home. And…if he insists on talking about her slightly heavy foot, he’ll have to follow her to church.

The Presenter/Master of Ceremonies …aka Patty Cake can always be relied upon to show up just for the dessert. Thankfully she’s fun, reads well, is a good sport, and doesn’t try to sneak out early. She’s also a whiz at fixing gowns with duck tape.

The Videotographer/CUT Person aka Windy, also in charge of wigs and shawls. She really knows her way around a camera and is a collector of props. Don’t let her park behind you, or you might have to wait while she packs up! She is a stand-up person which is good, because we were short of chairs.

**Full production scheduled for Saturday night, unless Kip and I decide to have date night at Burger King…