Once upon a time, long ago, (yesterday), legend has it that three chiefs and three beautiful princesses, packed up their mobile teepees and caravanned across dangerous lands to a place called Albany, Texas, to see a thing called FANdangle. (The emphasis is on Fan.)

Before I tell you about the awesomeness and the pageantry of Fandangle, I’ll give you a little folklore, which means background info, on the three adventuresome trail blazing couples.

First, we have Chief Rain in the Face, who arrived at camp Ft. Griffin obviously hot under his headdress. It seems he washed his many horse-powered transportation right before beginning his journey, only to come upon a couple of miles of dirt road due to trail construction. If that wasn’t bad enough, he got behind a water-spraying covered wagon…hence the name, Rain in the Face, which  sounds more dignified than, Water and Dirt on the Horses.

The chief brought, She Who Must be Obeyed with him, mainly because she knows her way around a teepee and makes great seafood dishes. She is a retired code talker, which is code talk for teacher.

Chief Runs a Muck brought Princess Pass the Piece-pipe. Say that three times really fast. Her main job is to clean up the teepee after Chief Runs a Muck makes his favorite strawberry ice cream. She also helps with Buddy the canine who spends his days guarding the campsite and his nights tolerating Punkin and I can’t remember the other cat’s name, but it also starts with a P.

Last, we have Chief Eats a Lot with Princess Doesn’t have a Clue. Seriously, she doesn’t know the difference between a teepee and a wigwam. She spends her days scrounging around for food because Chief Eats a Lot...eats a lot.

Back to the Fandangle.

The three aforementioned couples had a fabulous time. We toured Ft. Griffin with Eric, who shared a wealth of information with us. The RV Park in Griffin State Park was great… (See the sunset below.)

We saw the Fandangle parade where we listened to the calliope, and watched as beautiful horses passed by. Some were pulling wagons or proudly carrying riders holding flags. Others were ridden by women wearing costumes of the times. 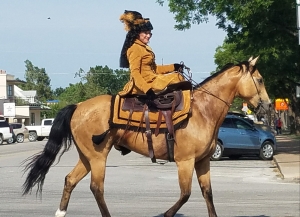 The Jailhouse Museum and the Courthouse are really something to see, and the shops downtown are fun to explore. The pharmacy complete with a full service soda fountain is an experience you won’t want to miss. 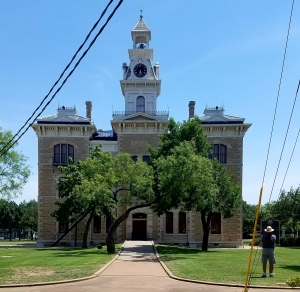 We attended Church services where we were treated to the sounds of a beautiful pipe organ, not to mention a thought provoking sermon. I could go on and on about the town of Albany and it’s family oriented community.

The Fandangle is an experience like none other. Give yourself the gift of seeing the magic of the performances of a few hundred Albany residents. The ages of the talented participants range from three months to ninety-eight.

(These beautiful Longhorns are featured in the show.)

The story the narrators and the music tells is steeped in history and laced with pride and love. Fandangle is always the last two week-ends in June so there are shows next Friday and Saturday evening. The outdoor setting is beautiful and the music is incredible. The many prop changes are totally seamless. 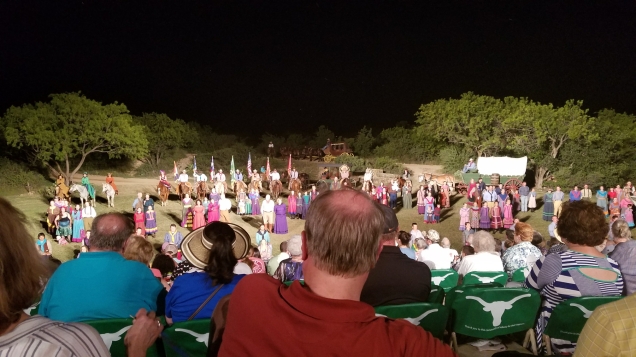 Thank you Pat and Jerry Davis for suggesting this might be a fun outing for our little group of RVers, and many thanks to Jeff and Gaye Davis. They made our trip even more special by giving us the rundown on all there was to do. I don’t think we missed much. Their family, including Nolan and Lori, has been a part of Fandangle for over a dozen years. We were all invited to their beautiful home for lunch. Chief Eats a Lot loved it!

I think it goes without saying the three chiefs and three princesses, along with thousands of others, are big fans of Fandangle.