Does everyone go through times in their lives when they wish they could be exactly, I mean exactly like someone else? Do they change their hairdo, buy different clothes, join different groups, make different friends…Is this is sounding like some crazy person?

Thankfully, I never got caught, and I wasn’t what some people might think of as being a stalker. Though I have confessed many times, people don’t seem to be afraid when I come around. Well maybe when I’m dressed like Yram Sicnarf or Venus the laughter coach, but those two are just alter egos.

I’ve written so many times about my admiration for a certain girl I knew in high school, I won’t make you see that movie again, but something happened this week that really touched my heart. I will have to backtrack just a little, here.

When I started writing the longer fictional stories on my blog, I began with the story of Abbie Ann. The second book was The Story of Bonnie Blue. Both were inspired by dolls that I had purchased at the Goodwill store.

“B” was as far as I had gotten in the alphabet when I attended the All School Class Reunion of 2016 held in my hometown of Murdo, SD. The wife of Eddie Jackson, (one of my classmates) told me about a doll she had that reminded her of Connie Jackson, who was the subject of my deep admiration. (Connie was also Eddie’s sister.) They said when they got back to Nebraska, they would email me some photographs, which they did.

That was the first sign that a Connie doll story had to be my next endeavor. I now had a “C”… Eddie even helped me by writing true stories about what it was like for Connie and him to grow up on a ranch near Murdo and go to country school.

When I put my Murdo Girl Memories into a book, I wrote more about my days of worshiping Connie. I coined the phrase Connie like. My hair, clothes, shoes, school activities, like girls basketball and cheerleading, all had to be Connie like. I fell a little short on some of my Connie likes such as basketball, but I tried. 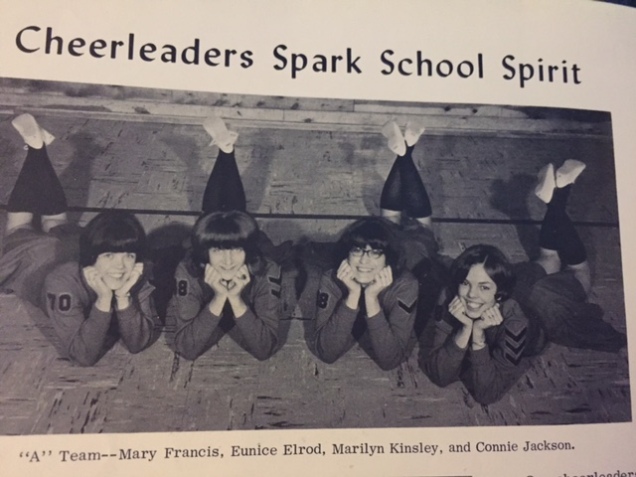 When I moved all of my dolls and collections into my then she-shed, now cottage, I mentioned on the blog that I did not have the Connie doll. I have Bonnie Blue and Dakotah’s princess doll from my “D” story, and I have since changed my “A” story to Arf. I never published Abbie Ann, anyway. I don’t have an Arf doll, but I’m looking.

A couple of days ago I received something very special in the mail from a very thoughtful person who happens to be Connie Jackson’s cousin. Her name is Kerri Venard.

Bonnie Blue is warming up to her…

My Dakotah’s Story princess doll is coming around, too. She and Connie like are about the same size.

Arf will love her…

This is a picture of Connie Jackson that was posted on the Murdo and Jones County Facebook page. She was modeling for some event. I think she was a senior in high school.

I didn’t see Connie again after high school. She was a couple of years older than me and we both moved away from Murdo. It was after I had written about her that I learned she had died of cancer at the young age of 63. I wish I could have seen and talked with her one more time.

Thank you, Connie, for the memories and thank you, Kerri, for giving me this beautiful Connie like doll. I love her.